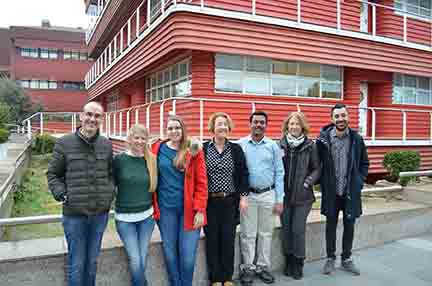 Longathan Rangasamy has won the Ramalingaswami scholarship granted by the Department of Biotechnology and the Ministry of Science and Technology of India, which is granted to researchers in his country who are working abroad to promote the creation of new research groups. The Dr. Rangasam and is working on the Duality project funded by a grant Marie Sklodowska-Curie, in the framework of the European Program for Research and Innovation, Horizon 2020. The project focuses on the development of drugs to treat cancer using as a target several enzymes involved in tumor processes and is directed by researchers from the Faculty of Pharmacy, Ana Ramos and Beatriz de Pascual-Teresa.

"My intention is to establish a long-term collaboration between the Vellore Institute Technology and CEU San Pablo University for future projects. I also want to take advantage of the experience of the group led by Professors Ana Ramos and Beatriz de Pascual-Teresa in drug design. With the scholarship received from the Government of my country, the possibility of financing the mobility of researchers between the two countries and encouraging the exchange of experience and knowledge is opened," explains Dr. Rangasamy. It also contemplates requesting joint proposals for projects co-financed between India and the EU.

The postdoctoral researcher, who until January will continue in Madrid with the Marie Curie Scholarship, highlights that "the new knowledge obtained at the CEU San Pablo University on teaching, research, knowledge transfer, project writing and dissemination of results in national and international conferences has been key to obtaining the Ramalingaswami scholarship."

Cancer is a very complex multifactorial disease caused by many dysfunctions in genes, in which different approaches are required. In Duality, "a new series of dual HDAC / CK2 inhibitors have been designed and synthesized. Histone deacetylases (HDAC) are a group of enzymes that play an essential role in the regulation of gene expression. When they are erroneously regulated, they prevent the expression of certain genes, such as tumor suppressors, leading to the transformation into cancer cells. On the other hand, it has been observed that, in many types of cancer, there is a high activity of the protein kinase CK2. of dual HDAC / CK2 inhibitors is a promising new strategy for the development of cancer drugs ", the researchers explain.

"We are also synthesizing molecules capable of degrading proteins, known as PROTACS, one of the most innovative techniques currently in drug design. Preliminary results reveal that our compounds show promising anti-cancer activities in multiple cell lines," Longanathan adds. The results have been reported in several national and international conferences, and publications in high-impact scientific journals are being prepared.