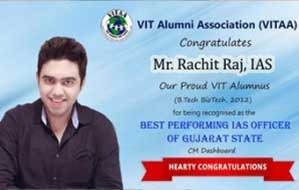 VIT feels proud as its Alumnus, Mr. Rachit Raj, IAS, has been recognised as the "Best Performing IAS Officer" of Gujarat State, as per the CM Dashboard, which closely monitors the working of various government offices and the development of district level activities under different schemes launched by the state government.

Mr. Rachit Raj, IAS, is currently serving as the District Development Officer, Dahod in Gujarat. According to the National Institution for Transforming India (NITI) Aayog’s first Delta Rankings, Dahod district has been selected as the ‘most aspirational’ one. Dahod has bagged the top spot in the ranking featuring 108 districts. The NITI Aayog Delta ranking captures five developmental parameters including incremental improvements of aspirational districts on health, education among others in the two month period of April and May this year.

Mr. Rachit Raj, IAS, graduated with a B. Tech. in Biotechnology, from VIT in the year 2012.