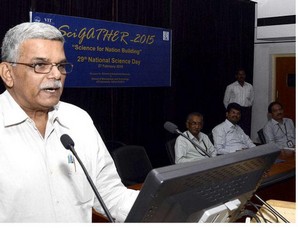 National Science Day celebrated at SciGATHER 2015
Production of potable water using the desalination technology is very cheaper and therefore the technology should be harnessed to provide potable water to the people at a cheap cost, said V.G. Idichandy, Professor Emeritus, Department of Ocean Engineering, IIT-Madras.

Speaking at SciGATHER 2015, the 29th National Science Day celebrations organised by the School of Advanced Sciences (SAS) and the School of Bio Sciences and Technology (SBST) of the VIT University here recently, Dr. Idichandy called upon the people to stop polluting the ocean since it would have a catastrophic effect in the future.

Climate on earth is controlled by the oceans. The changes in its temperature are caused by human activities. This can have a direct impact on the marine organisms and in turn on biodiversity.

Coral bleaching, due to increased temperature, and inhibition of shell formation, are some of the appalling effects due to acidification of the oceans, he said.

The Emeritus Professor said that National Science Day was being celebrated for the last 29 years on February 28 in honour of the Nobel Laureate Sir C.V. Raman.

It was on this day in 1928 his discovery of the Raman Effect came to light at the meeting of the Indian Association for the Cultivation of Science in Kolkata. The main objective of celebrating National Science Day is to infuse scientific temper in the young minds.

Ocean engineering
Pointing out that ocean engineering offered several opportunities in the fields of extraction of oil and hydro-carbons in deep sea, he said students should use science for nation building, which is the theme of the National Science Day this year.

Since oceans are inextricably linked with human life, knowledge of oceans should be imparted in the school level, he said.

G.V. Selvam, Vice-President of VIT, who presided over the function, appealed to the students of biotechnology to come up with suggestions on improving the quality of the agricultural produce and expanding agriculture in the light of decline in agriculture on account of the tendency of farmers to give up cultivation.

“You should change the mindset of farmers that keeping the land idle is more profitable”, he said.

Climate on earth is controlled by the oceans. Human activities change its temperatures and this affects marine life