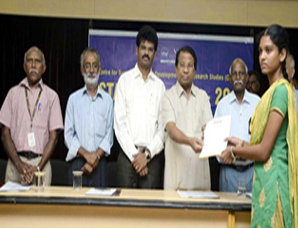 'Nearly 71% of those selected are first-generation students'

A total of 61 students received admission letters to various courses at VIT University under the institution’s Support The Advancement of Rural Students (STARS) programme on Tuesday.
The students hailing from rural areas had secured high marks in the class XII examinations.


Distributing the admission letters, VIT Chancellor G. Viswanathan said nearly 71 per cent of candidates selected under the STARS programme were first-generation students to pursue higher education, which was the only means for a country to prosper.


According to a press release, this was the ninth year of the programme.
It was launched under the Education for All initiative to support rural students who had secured high marks in the Board exam but could not pursue higher education owing to economic reasons.
An induction and orientation programme for students was also held.


Exhorting students to make use of the opportunities provided, Mr. Viswanathan asked them to develop self-confidence.
Students coming from Tamil medium of education would be taught English through special classes at the university, he added.