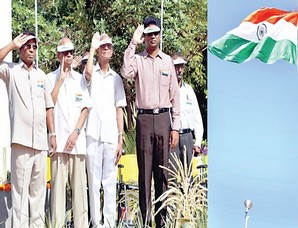 VIT University may not be competing with the tallest flagstaff in the country, which is in Faridabad, Haryana (250-feet pole with 96 by 64 feet flag) or even with the one in Central Park in Delhi (207-feet pole with 60 by 90 feet flag), but it has found a place perhaps as the first university in the country to hoist a 30-feet by 20-feet (600 square feet) flag on a 100-feet flagstaff.

The flagstaff made of steel and weighing 1,750 kg was hoisted with the Tricolour made of satin cloth by the VIT chancellor G Viswanathan at a function held on Saturday as part of the 69th Independence Day celebrations.

The university has also made arrangements to illuminate the flagstaff during the night hours as a symbol, according to the chancellor, of the utmost responsibility of people to safeguard freedom as freedom was not attained in a day, but by thousands of our men sacrificing their lives and thousands languishing in jails over many decades.

Speaking on the occasion,the chancellor said that India can prosper if only tax evasion, black money and corruption are totally eradicated.  Education for all would in fact ensure eradication of poverty too, he added.

In his special message to VIT students, he called upon them to work hard and remain disciplined. The high-profile flag should inspire every student on the campus to take pride in displaying their national identity instilling a sense of nationalism and patriotism in them, he added.