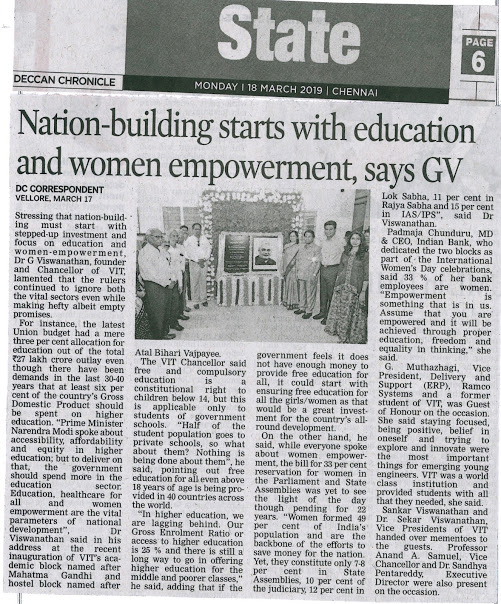 A towering 13-floor Hostel Block named after former Prime Minister Atal Bihari Vajpayee and a 5-floor Administrative Block named in the memory of Mahatma Gandhi was dedicated at Vellore Institute of Technology.

Padmaja Chunduru, Managing Director and Chief Executive Officer of Indian Bank dedicated the buildings as part of celebrations of International Women’s Day in the presence of Dr. G.Viswanathan, Founder and Chancellor of VIT, one of India’s finest and premier institutions providing world class education in the areas of engineering, management, agriculture and law.

In his address, Dr. Viswanathan said that women formed 49 % of India’s population and were the backbone of saving money in the country. At present, they constituted only about 7 to 8 % in Legislative Assemblies in the State, 10 % of the judiciary strength in High Courts and among Legislators in Lok Sabha and Rajya Sabha – the lower and upper houses of Parliament, the number was only 12 and 11 %. Further, they formed only 15% in Indian Administrative and Police Services, Dr. Viswanathan said.

The Chancellor said that everyone in the country was talking about empowerment of women and though the bill was introduced in 1996 to provide one-third of representation in State Assemblies and Parliament, it has been pending for the past 22 years. Despite all parties extending their support to the Bill, it was yet to be passed, Dr. Viswanathan said, adding that it was high time to honour the women of India and to give them their due place. To make this happen, it had to begin with women’s education, he added.

Free compulsory education till the age of 18:
Speaking about higher education and access to it, Dr. Viswanathan said that free and compulsory education was a Constitutional right to children below the age of 14 and this applicable only to those going to government schools, while half the children were going to private schools. “What is free for children who go to these private schools and nothing is being done about this,” Dr. Viswanathan asked. He said that this age limit should be increased to 18 till all children completed their plus two. He said that the Education Promotion Society of India (EPSI), of which he is the President, was not taking steps to increase the age limit for Constitution providing free education for children from 14 to the age of 18.

He said that Prime Minister Narendra Modi spoke about accessibility, affordability and equity in higher education. To implement this, the government should come forward to spend more money in the education sector. He recalled that for the past 30 to 40 years, there have been demands that 6 % of the country’s Gross Domestic Product should be spent on higher education, yet, the current share had not even touched 4 %. Dr. Viswanathan said that even during the latest Budget, only 3 % of the Rs. 27 lakh Crore was allotted for education. “We have suggested that if this is not possible to implement this immediately, the government can begin by providing free higher education to girls,” he said and that this could be followed by implement for the rest. “The country should spend more money on education and health and that is the important duty of elected government,” he remarked.

Dr. Viswnathan said that they had now two blocks in the name of Mahatma Gandhi and former Prime Minister A.B. Vajpayee with whom he had a long relationship. “I was with him from 1967 onwards when I was elected as Lok Sabha Member of Parliament. He was then the leader of Jan Sangh party. He was accepted by all parties in the country, including the Opposition and he was a lovable Prime Minister,” Dr. Viswanathan added.

In her International Womens’ Day celebration address after dedicating the two new buildings, Ms. Chunduru said that India possessed a better culture of encouraging women without judging them based on their looks, complexion. She pointed out 33 % of employees of Indian Bank were women.

She pointed out that India has a better culture of encouraging women without judging by their looks, complexion and Indian Bank has 33% women employees. “Empowerment is something that is in us. Assume that you are empowered and it will be achieved through proper education, freedom and equality in thinking,” Ms. Chunduru said. She also pointed out that support of parents, spouse and friends will help people to take their next step in the right direction.

“Today there are so many options for jobs, education, marriages, to choose how you work and where to work. Hence, options are good but making a decision is equally very difficult. That decision making is what you need to empower yourself for,” she said. Ms. Chunduru said that today’ s International Womens Day motto: Think Equal, Build Smart, Innovate for change was reflected in the two building blocks Mahatma Gandhi and Vajpayee Blocks that were inaugurated today. These buildings were equipped with state of the art facilities and it spoke about the Chancellor, Dr. Viswanathan’s vision and also Indian Bank’s association with VIT.

In her address, the Guest of Honor, Ms. Muthazhagi said that staying focused, being positive, belief in oneself and trying to explore and innovate were the most important things for emerging young engineers. A former student of VIT, said that a perfect gift was in store for students at VIT. She said that VIT was a world class institution and provided students with all that they needed. It was the perfect place for a place to learn with a chance to grow. She appealed to the students to acquire the best of knowledge and to achieve their dreams. “I have taken the best of my learning at VIT and enriched many soft skills which has helped me in my career at Ramco – the both in terms of always being a good team player and an understanding leader and mentor,” Ms. Muthazhagi said. She added that 20 years ago, she studied at VIT and if she had risen to what she was at Ramco Systems today, it was entirely due to her self confidence.

Turning her attention to the women students of VIT, she said that work life balance was the key and that everything was created twice – first in the mind and then in reality. “Stay focuses, plan and execute with priorities - be it at home or at work. Invest in yourself to move further and remember that keeping fit and maintaining good health is the best wealth,” she said. Yoga for health, harmony and peace should always be the priority for women and at Ramco, they were taking part in Yoga classes everyday to keep themselves de-stressed and rejuvenated.

Ms. Muthazhagi said: “Learn as u teach and teach as you learn,” and added that she always looked upto Chancellor Dr. Viswanathan as one of her mentors as he was always, simple, young and energetic. “We owe a lot to you sir as a person of great vision in the field of education, especially in uplifting women for the development of our society,” she said to thunderous response from the audience. She said VIT always maintained a gender balanced environment, providing equal opportunities for women and men to excel in all fields.