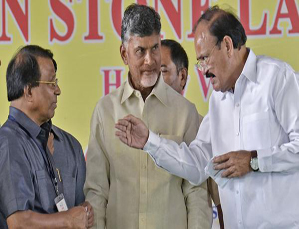 Research activity in academic institutions in India is alarmingly low compared to China. The neighbouring nation is far ahead both in terms of research papers published and number of Ph.D scholars, according to Union Urban Development Minister M. Venkaiah Naidu.

He was speaking at the stone-laying ceremony of Vellore Institute of Technology (VIT-AP) campus here on Thursday.

“The percentage of students pursuing Ph.D in China is 39 compared to 3.04 in India. India accounts for a mere 2.8 per cent of research publications across the globe while China’s share is 9.4 per cent. Similarly, China has patents five times more than India,” Mr. Venkaiah Naidu said, adding that students and educational institutions should focus on research.

Stating that India still had 32 per cent illiteracy, he said that it was a blot on every citizen. Mr. Venkaiah Naidu said that a new education policy was being finalised based on five pillars such as accessibility, equity, quality, accountability, and affordability. “Academics need to debate on the draft policy for formulating the best education policy,” he added.

Chief Minister N. Chandrababu Naidu said that Amaravati would be developed into a knowledge city with world-class universities. “The government proposes to bring in world-class educational institutions such as Stanford and Oxford to Amaravati. And for that to happen, the Central government has to make necessary amendments to the exiting laws,” the Chief Minister said.

Mr. Chandrababu Naidu recalled that in the unified Andhra Pradesh, there were only 30 engineering colleges when Information Technology was moving at a fast pace. Realising the need for more colleges, the government then encouraged private colleges in engineering.

“VIT-AP is now on your doorstep. Many more universities and institutes would come here,” he said.

VIT Chancellor Viswanathan said that the institution would offer 26 seats free of cost to meritorious students from government junior colleges in the State. It would also adopt Velgapaudi, Sakhamuru, and Inavolu villages and take care of the education and health needs of the villagers, he added.