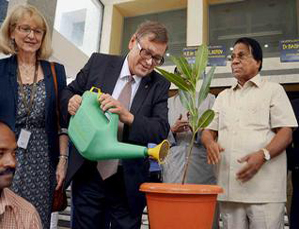 Consul-General of the Russian Federation for South India Sergey L. Kotov on Friday laid stress on the importance of being fluent in Russian language in the light of projects such as Kudankulam Nuclear Power Project (KKNPP) and research programmes between India and Russia.

“KKNPP is not the only project between the two countries. For India, the project not only means increasing of power supply but also means that India, in future, will have new wave of nuclear power managers and engineers. They will be partially using Russian equipment. To manage their everyday affairs, they must understand or be fluent in Russian,” he said.

He was speaking at the launch of Russian and Arabic courses for students of VIT University. He added that there were joint researches between the two countries in space research and projects such as Brahmos.

“Persons with good command of Russian have good prospects of finding jobs that would be interesting and well paid in India, and may be in Russia too,” he added. He noted that good command of foreign languages brought in job opportunities inside and outside the country.

Mr. Kotov said that historians of linguistics had said that ancient Russian had much in common with Sanskrit.

“They are of the opinion that both had same sources of birth,” he added.

Michael Gorbatov, Vice-Consul and Director, Russian Centre for Science and Culture, said the two countries, which were fast growing, were step-by-step restoring the level of cooperation that existed during the times of Soviet Union.

“The recent video conference among Russian President, Prime Minister of India and Tamil Nadu Chief Minister has declared clearly that two more units of Kudankulam nuclear power stations will come up. More units will come up in other States such as Andhra Pradesh,” he said.

He noted that those who knew more foreign languages were statistically more successful when compared to those who did not know.

"Russian is the sixth most spoken language in the world," he said. "There are good opportunities in Arabian countries, and having a basic knowledge of Arabic is an advantage," he said.