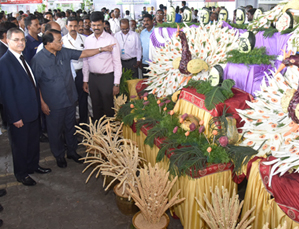 The fourth edition of Agri Expo began on Monday at Anna Auditorium. Delivering his Presidential address, Dr. G.Viswanathan, Founder and Chancellor of VIT, said that the importance of farming was spelt as far back as a thousand years ago in Thirukkural by Saint Thiruvalluvar. VIT has been according top priority to the welfare of farmers and as part of the first phase of such welfare measures, the University has been conducting Agri Expo for the past few years for farmers in Tiruvannamalai and Vellore districts.

With a population of 134 crores people, India’s share was 18 per cent in the world population. He said that land and water resources were scarce with only 2.5 per cent of the total land mass of India available for farming and only 4 per cent of the total water could be used for human consumption. Hence, while handling these two precious natural resources, a great amount of caution had to be used and only then could we protect the country. Dr. Viswanathan said that due to depletion of water resources and reduction in the amount of land for farming owing to factors like taking away farmland for real estate and housing purposes, the extent of farming in India was coming down. According to a recent survey, lakhs of people had left the agriculture sector in the country, Dr. Viswanathan said.

“Our ancestors had left behind 41,000 lakes and tanks in Tamil Nadu. In Vellore alone, there are 1,200 of them. If all these lakes and tanks along with Palar were protected, deepened, widened and desilted, water stored in them during the monsoon could be used during the season when water was scarcely available,” the Chancellor said.

He recalled that 50 or 60 years ago, it was the people who themselves were engaged in the protection and conservation of these water resources, instead of the government. However, it was the government and its various departments that were engaged in this task and hence it was not being done properly. Dr. Viswanathan said that the 100-day employment guarantee programme (MNREGA) was not being effectively implemented and hence a lot of funds allotted to it were being misused. He was of the view that farming activities too should be included under this scheme. He said that educated people too should involve themselves in agriculture activities at least once a week and this way, the agriculture sector would get its due respect and honour.

The Founder of VIT University said that for several decades, Tamil Nadu and Karnataka had been fighting over Cauvery River water and 100 crores of rupees had been spent on fighting this dispute alone. Despite that, Tamil Nadu received a meagre quantity of water from Cauvery River. Dr. Viswanathan also pointed out that over 3,000 DMC feet of water simply drained into the ocean from Godavari River and to prevent this, the government should take up inter-linking of rivers. He said that at least rivers within Tamil Nadu should be linked initially and there was no need for the government to ask for permission from anyone. If Cauvery and Palar were linked, there will be good flow of water in the Palar river, he said.

Dr. Viswanathan added that Agri Expo was conducted to encourage the farming sector and irrespective of whether the State government supported agriculture or not, VIT would continue to play an important role in the development of agriculture and the welfare of farmers.

In his address on the occasion, Mr. G.V.Selvam, Vice President of VIT, said that the Agri Expo, the annual two-day conference and exhibition being held every year for the development of agriculture had resulted in kindling the interest among farmers about new techniques in cultivation. Farmers believed that it was more lucrative to convert their land as housing plots instead of carrying farming activities. If the pace of converting farm lands to housing plots continued, the coming generations would struggle for food, Mr. Selvam said.

He said that water was most important for agriculture, but due to indiscriminate mining of sand, it would result in a stage where water cannot be saved and this would severely affect the future generations. Mr. Selvam said that the sand formed in the river beds was the result of process spanning several thousand years and people should not destroy it. Outlining the efforts of VIT to protect Palar River, he said that they had launched the Green Palar movement to clean up the river. This had resulted in an increased flow of water in the river, Mr. Selvam said.

He was of the view that in the lands that were left fallow in rural areas, cultivation of alternative crops to ensure that farming continued there and that no piece of land should be left waste. Stating that organic farming was becoming very popular, he appealed to farmers to take up to organic farming in a big way. To ensure that the farmers get a good price for their produce, he said that the Thondaimandala Agriultural Produce Marketing Centre was started.

Mr. Sreihin, who delivered the inaugural address after formally launching the two-day event by lighting a traditional lamp, said that he was extremely delighted to inaugurated Agri Expo. He said that African – Asian Rural Development Organisation was providing project reports to several countries for implementing the Sustainable Rural Development Programmes. He said that they were now in a stage where food production had to increase to keep up with the demand of the increasing population. He said that food production was not adequate and hence, it was important to use natural resources in a such a manner that enough food was produced for all people and that people were also duty bound to protect it.

Despite their levels of population, countries like Japan and Ethiopia were implementing pioneering techniques in farming. In India, farmers were categorised into big, medium and small and the number of small farmers was huge. As the small farmers were not getting a good price in proportion with their produce, they were unable to grow. For Sustainable Rural Development to succeed, the development of agriculture was most important and farmers’ welfare was paramount, Mr. Sreihin said.

The United Nations too has made proclamations on Sustainable Rural Development and it was through this that countries could witness progress. For this to happen, new techniques in cultivation had to be taken up. African – Asian Rural Development Organisation was involved in this, Mr. Sreihin said and added that institutions like VIT should join to support their efforts.

Among others who took part and spoke on the occasion included Anand A Samuel, Vice Chancellor, C.R.Sundararajan of the Centre for Sustainable Rural Development and Research Studies and Dr. S Babu, Director of VAIAL. On the second day of the Conference on Tuesday, a Conference on Farming will be held. There will be demonstration about techniques on high yield of crops using less water, use of organic fertilisers and organic farming.

More than 4,500 farmers will be taking part in the two-day event in which 112 stalls will be on display during an exhibition on new equipment, farm produce and credit from agriculture, horticulture, sericulture and farming related industries among others.