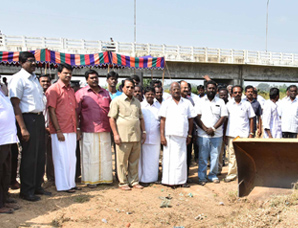 The Vellore district corporation and all the district panchayats, including the general public should take the responsibility of keeping the Palar river from getting polluted, VIT University Founder & Chancellor Dr G.Viswanathan made an open appeal before the cleaning work in the river began for the second year on Saturday.

Dr G.Viswanathan said that in order to protect rivers, the government could make use of the manpower of the 100-day Rural Employment and Guarantee Scheme for strengthening the banks of Palar river. He added that all the NGOs in the district and the public at large also should come forward to share the responsibility.He reminded that the
Public Works Department should take stringent action against those who had encroached canals of rivers and lakes and see that no more encroaches in the river area.

He also made an open appeal to the fans clubs of Rajinikanth, Kamal Hassan, Vijay and Suriya who were present at the meeting to join hands with the project and make it a grand success and role-model for others.