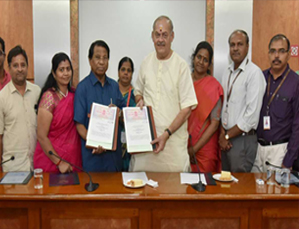 Vellore Institute of Technology, Vellore would establish a Centre for Research in Indian System of Medicine (CRISM) in association with Arya Vaidya Pharmacy Research Foundation (AVPRF), Coimbatore. The centre would be the first of its kind in the country that would facilitate advanced research on Ayurveda and Siddha. It would function under the School of Bio Sciences and Technology of the VIT, and would be involved in basic and translational research that can elucidate more on the holistic pharmacology of Ayurveda and Siddha systems of medicine. This surpasses the earlier record of 129 dream offers made by the same company to the 2017 graduating batch of VIT (Source: page 95 of the 2019 edition of the Limca Book of Records). This is also the eighth time that the VIT is entering the Limca Book of Records for campus placements. Earlier, the VIT entered the Limca Book in 2009, 2011, 2014, 2015 (two records), in 2016 for the highest number of IT services placements, and in 2017 for the highest number of dream offers.