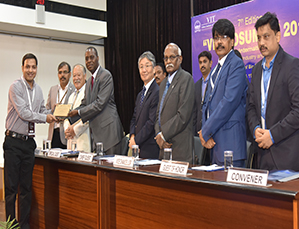 Former students who had excelled in Bio Sciences and Technology feted
More than 600 delegates including students, young researchers, scholars, experts, academicians and industry representatives are taking part in the annual BIOSUMMIT 2018, inaugurated at Vellore Institute of Technology on Monday.
This international two-day event was inaugurated by Ikenoue Tsuyomu, President of Miyazaki University, Japan in the presence of Ernest Rwamucyo, Rwandan High Commissioner to India who was the guest of honour. Former students of VIT who had made outstanding contribution through their work in the fields of Bio Sciences and Technology were awarded at this inaugural function. The international conference has been organised by the School of Bioscience Technology.
In his inaugural address, Professor Tsuyomu, recalled that it was in 2016 that VIT and their university had entered into a Memorandum of Understanding for exchange of students and faculty and as per the terms of the MoU, students from both institutions were engaged in teaching and research activities. He said that India was making rapid advancements in science and technology. He also said that their University expected an increased number of students from India.
At the inaugural function, Mr. Rwamucyo handed over awards to distinguished 15 former students who had completed their B.Tech in Biotechnology and who had made significant contributions through their work in the food and pharmaceutical industries. In his address, Mr. Rwamucyo said that Rwanda had maintained very good and strong ties with VIT for several years. He said that he was delighted to see that a sapling planted by Paul Kagame, President of Rwanda, had now grown into a full bloomed tree.
On the occasion, the guests of honour, Maruyama Masugi, Dean, Faculty of Medicine, Miyazaki University and C.N.Ramchand, Chief Executive Officer, Saksin Lifesciences Private Limited, Chennai, also addressed the gathering.
Professor Anand A.Samuel, Vice Chancellor of VIT, presided over the function and exchanged pacts with Genomics Centre, Bengaluru, First Trust India, Nagercoil, Stem Cell Therapies, Noida, Swim Biopharma, Chennai, Sri Vari Food Products, Kovilpatti and Sattva Solutions, Mumbai as part of the University’s efforts to engage in joint research activities for its students and faculty.
Prof. K.M. Gothandam Dean of School of Bioscience and Technology welcomed the gathering. Professor V.Mohana Srinivasan, explained the objectives of the Conference. K.Ramanathan, joint organiser of the Conference, delivered a vote of thanks.