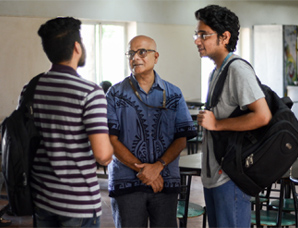 Dr. Ghosh and team develops a seeding technology to weaken marine clouds that makes cyclones deposit rainfall in the seas

For people living among the coast of the Bay of Bengal including Chennai that frequently experience marine cyclonic activities with intense rainfall, there may be some respite with the development of a conceptual model by senior professor, Dr. Satyajit Ghosh and four of his students attached to VIT University.
This gives hope that storms brewing over the Bay of Bengal can be 'diluted' and made to precipitate over the sea reducing the cyclone's impact on cities.
"This is a first of its kind approach using geo-engineering technology," Ghosh told Express on Thursday.
The eastern coastal line of India is routinely battered by several tropical cyclones that affects over 13 million people living along the coast. The method developed by his team has a novel seeding technology using remotely controlled rockets carrying sea-salt droplets in jet mode from a fleet of Navy ships in the sea into the base of the clouds.
The team which studied the simulated Thana cyclone mode, has come up with tweaking of the microphysics of the storm cloud using this technology so that the eye wall of the storm can be weakened and the rains made to precipitate in the sea itself fin stead of pounding the cities.
"This was we can reduce damage to human lives, property etc.," he added.


Ghosh said that compared to the Arabian sea, the tropical storm activity in the Bay of Bengal is four times more here due to is shallow conditions that result in the warming of the water. Almost every year, this region experiences a tropical storm causing misery to people.
While India has come a long way in reliably predicting weather conditions, the issue of tackling cyclones still poses problems. this is where the CIT model can help provide a viable technological solutions to reduce the impact of the fury of Nature. The two-year study by the team explored several technological options before arriving at the seeing process to weaken the marine clouds.


"We are glad that the Royal Meteorological Society in UK which is the oldest society in the world has accepted our concept after subjecting the same to international peet review and has published it in the latest issue, " said an elated Ghosh adding, 'publishers John Wiley has published our work in the public media in USA and UK.
The study has also helped student-author Akshath Sharma to gain admission into Cambridge University for a direct Ph.D., while his colleagues A Arora and G. Desouza have secured admission into prestigious universities in Europe for PG programme.


"We are working in developing a prototype model of the concept which would be field tested in the next two year in collaboration with Leeds University," Ghosh said.
He went onto add that, "a paper in this regard has also been accepted by the International Conference hosted by the Mathematics Association in Cambridge University this July".
It is likely that in the next five year, it may well be possible to tackle the tropical storms very effectively using our concept and thus relieving people affected by theme and government from the impact of cyclones," Ghosh said with confidence.