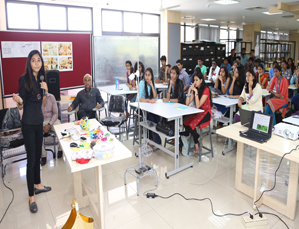 Can Origami be useful in Architecture

Does anyone know that Origami (the Japanese art of folding paper into various shapes and designs) can come in handy for preparing architectural designs? This revelation came to light through an Origami Workshop conducted by 16-year-old Ms. Avi Krishna Natesan, 12th standard student of Sishya International School, Adyar, Chennai under the auspices of the VIT School of Planning and Architecture (V-SPARC) at the VIT University campus hereon Saturday.


Ms. Avi said that paper designs could form the basis for several architectural designs. She demonstrated how several interior decorative features such as wall paper, carpets, sofa, chair and table can also be designed through paper-folded designs. Knowledge of Origami would be very useful to architecture students. Besides, practice of Origami would also relieve one from the mental stress resulting from work burden at the office, she said.

Ms. Avi is a self-taught Origamist who has been practicing the art for the last three years. She has conducted workshops for Abhuydaya, a non-governmental organisation at the S.P. Jain Institute of Management and Research in Mumbai. She has taught Origami as a SUPW (socially useful productive work) subject to the students at the Shishya International School. She conducted the workshop at V-SPARC as part of her efforts to share and spread her knowledge among others.