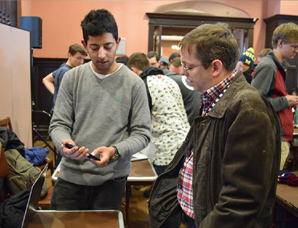 Can your mobile script your autobiography

That’s the question that won this team the Two Sigma Beaker Api Prize at Pennnapps, one of the world’s largest and longest running collegiate hackathons.

The team consisting of Android developer Arpit Sabherwal, UI/UX designer Aravind Prasad. Backend developer Namit Juneja and Big data analyst Ankesh Anand. Ankesh Anand the only non-VITian in the team is from IIT, Kharagpur and perfectly filled the gap in the team.

The team was among the top 10 out of 300+ teams and went on to win one of the sponsor prizes, the best use of Two Sigma Beaker Api Prize which was a prize for a 1000$ and some goodie bags.

‘The experience was definitely something none of us will ever forget. The organising team was very welcoming and helpful and all the participants were pretty awesome to interact with’, said team member Arpit Sabherwal.

Surely a hack that stands out from the crowd!