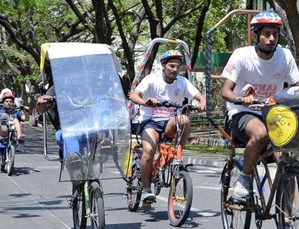 
Four-day Mechnovate’ 16 comes to a close at VIT university


At the end of the four-day Human Powered Vehicle Challenge (HPVC) at VIT University, the team from Chandigarh University bagged the top spot for their vehicle.


Events of the American Society of Mechanical Engineers - HPVC and Students Professional Development Conference – featured at the four-day Mechnovate’ 16 at VIT university.

Students of Mechanical Engineering from various universities and colleges designed and manufactured human-powered vehicles for the challenge.


Out of 40 cycles, which were taken up for safety tests on Friday, 34 qualified for the next level of racing.


On Saturday, the 34 human-powered cycles entered into the endurance test. The race was conducted for 2.5 hours. It mandated covering 13 rounds by applying only human energy. It tested how far the cyclists had covered the distance, and the speed of reaching the destination, a press release said.