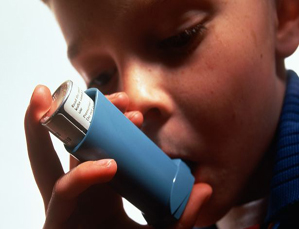 Child has asthma Get to know in seconds

It may take a great deal of patience and time to confirm asthma when a child is rushed to a clinic with breathing complication or coughing fits for it involves taking an x-ray and then getting the patient to breathe through a mouthpiece of a device. But a tiny strip can soon do that job saving valuable time and letting a physician begin treatment right away .

A team of researchers at VIT University has developed the strip that allows doctors to conduct a non-invasive breath test and get results within a matter of seconds. The white strip would turn blue when an asthmatic breathes over it. The strip, which has been tested in laboratories, will soon undergo clinical trials before it hits the market. And while it can detect the ailment in adults as well, the strip will be useful for children since it is difficult to put them through medical tests.

Senior professor at School of Biosciences and Technology , VIT University , Radha Saraswathy , who led a team that developed the product, said, "The strip which is for use by doctors is non-invasive, saves times and cost." The invention will be useful for children between three and five years because they cannot be made to breathe into a device for diagnosis.

The strip is made of a fibrous material that acts as an absorbent as it is coated with chemicals needed for the breath test. It reacts to the presence of excess nitric oxide in the breath of a child when placed under the nose.

Dr S Narmada Ashok, director and consultant pediatrician, Nalam Medical Centre and Hospital, Vellore, who will be involved in clinical trials, said, "It works similar to a pregnancy test kit.The strip helps us detect and initiate treatment much earlier than it would take an x-ray or a lung function test to give results. We will also conduct lung function and take x-rays along with the strip test." Clinical trials are expected to begin at the medical centre by next year.

Dr Ashok said doctors would look at other symptoms to differentiate between asthma and other respiratory ailments associated with wheezing after the strip shows presence of nitric oxide in the breath of a child. She said the kit will benefit those visiting health centres and clinics that do not have x-ray or lung function test facilities in the vicinity.

Asthma is a chronic disease where the airways are inflamed leading to symptoms like shortness of breath, rapid breathing, coughing, wheezing and chest tightness. Medical experts said asthmatics exhale a high level of nitric oxide that is produced in the body to fight inflammation. The exhaled nitric oxide increases during exacerbation of asthma like shortness of breath and decreases with recovery in patients.

Treatment for asthma involves delivering drugs in the form of mist.