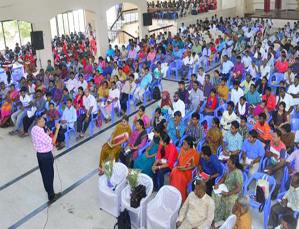 Choose Courses with an Eye on Future Careers


Students should look ahead while choosing the course they want to pursue. Addressing them at The Hindu Education Plus Career Counselling 2016 organised in Puducherry on Tuesday, Jayaprakash A. Gandhi, Career Consultant and Analyst, said that choosing courses based on the current job opportunities is not enough.


The Hindu Education Plus Career Counselling 2016 organised by The Hindu and VIT University combined career guidance with a talk on personality development and a motivational speech on improving memory.


Mr. Jayaprakash told the audience, which included parents, that having a sense about the future was as important as learning from the past. Parents should take time to explain to the students about how technology evolved over the years to change their lives.


Stating that the entire world was moving towards automation and new innovation was killing industries, he cautioned that the robots would take over 90 per cent of the jobs by 2045.


“It is not enough to nurture just dreams alone. One has to understand these realities and pursue studies based on that understanding,” he noted.


Stressing the need for education beyond syllabus, he said that 70 per cent of the syllabus was outdated. “If you do not update yourself, you will get outdated yourself. Parents should look for educational institutions that teach beyond syllabus and should never compromise on the best college,” he said.

Mr. Jayaprakash detailed the courses which would ensure high-paying jobs and open up opportunities available for the students. He suggested that students who want to pursue engineering take up computer science and IT.


He also encouraged girls to opt for mechanical engineering courses as job opportunities for women in these fields were tremendous. “If someone is interested in civil engineering, it is a must for them to specialise in PG course. Technology needs are changing and one has to study in-depth and be prepared to put in several years of hard work,” he said.


Talking about medical courses, he said there was a huge opportunity for the students who want to pursue MBBS. “Unfortunately, there are limited seats available. There are only two categories of students who could pursue medicine. The students have to be either really interested in medicine or extremely rich as the cut off marks for MBBS is going to increase this year,” he said. He added that there is lot of scope for students who want to study Indian medicine including Siddha, Homeopathy and Naturopathy. “Graduation in agriculture and veterinary science would be a good choice,” said the career consultant.


Referring to pure sciences and arts courses, he recommended only B.Sc. Mathematics and B.A. in English literature as sound choices. For girls, he suggested architecture, law, medicine, CA and teaching.


Mr. Jayaprakash’s parting advice to the students was to read newspapers regularly and keep themselves updated.
VIT University was the presenting sponsor and the Associate Sponsors were Sri Manakula Vinayagar Engineering College, IFET College of Engineering and Bharath University.