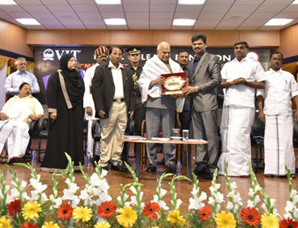 One of the prime attractions on the second day on Saturday of the two-day valedictory celebrations of the year-long Bharat Ratna and Former Chief Minister Dr. M.G.Ramachandran held at Vellore Institute of Technology in Vellore was the photo exhibition which has on display some rare photographs of the leader. The photo exhibition was inaugurated former Minister C.Ponnaiyan, in the presence of Dr. G.Viswanathan, Founder and Chancellor of VIT, who presided over the event.

The centenary celebrations of Dr. MGR was inaugurated on a grand scale on Friday by Tamil Nadu Governor Banwarilal Purohit. A host of personalities from the world of films and politics took part in the event, which has one of the biggest and most befitting tributes to the former Chief Minister, who is rightly regarded as one of the towering leaders in India in the world of politics and films. On Friday, during the inaugural function of the two-day event, Mr. Purohit released a book written by Dr. Viswanathan – ‘moondruezhuthu athisayam M.G.R.’ The Three Letter Wonder M.G.R. On the occasion, furniture worth Rs. 50 lakh were distributed free of cost to government schools.

On the occasion, the car used by Dr. MGR – M.G.R. 4777 was also kept on public display. This was unveiled by Minister K.C.Veeramani in the presence of his colleagues Nilofer Kabil, Sevur S.Ramachandran.

On Saturday, the most important event of the day was the inauguration of the photo exhibition by Mr. Ponnaiyan in the presence of Dr. Viswanathan, who presided over the event. G.V.Selvam, Vice President of VIT was also present and welcomed dignitaries with a shawl and also presented a memento to them. Also on display in the exhibition are the hat and glasses used by Dr. MGR.

People showered rich tributed and recalled Dr. MGR’s contribution to the film world, the world of politics and also to the people of Tamil Nadu. The former ministers spoke in length about his acts of charity, his humaneness, the nutritious noon meal scheme for children, his contribution to the development of higher education, his decision to make people from all communities be appointed as Village Administrative Officer, women’s empowerment, his ability to function by embracing and taking along everybody with him, his quality to be friendly even towards rivals, his quality to extoll virtues in his films and several other notable traits.

Special debate (pattimandram) held at Anna Auditorium on the topic ‘What is the reason for the fame of People’s Leader, Revolutionary Leader Dr. M.G.R. – cinema or politics.’ which was moderated by Professor K.Gnanasambandan.

This two-day event was also attended by the members of Dr. MGR Mandram from various districts including Vellore & Thiruvannamalai, loyalists and fans of Dr. MGR flocked to the ceremony