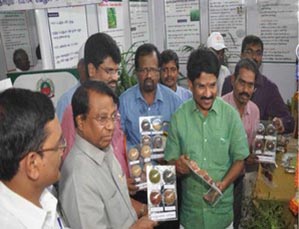 "Farmers should take to crop rotation and water saving technologies in order to protect soil wealth and tide over water scarcity, C. Rajendran, Joint Secretary, Agriculture Department said on Saturday.
Speaking at the inaugural function of the two-day Agri Expo organised jointly by the Centre for Sustainable Rural Development and Research Education (CSRD & RE) of the VIT University, Vellore, Tamil Nadu Agricultural University (TNAU) and the National Bank for Agriculture and Rural Development (NABARD) at the VIT campus here on Saturday, Mr. Rajendran said that soil health has been affected badly here.
He explained that it is because of the practice of farmers cultivating the same crop year after year.

The farmers should also conduct soil test before taking up cultivation. The Department of Agriculture has tested 80 lakh soil samples and given appropriate advice to the farmers in the last four years, he said.
The Joint Secretary said that in view of the chronic water scarcity faced by the farmers in Tamil Nadu, they should adopt water-saving technologies and cultivate alternative crops which required less water.

G. Viswanathan, Chancellor of VIT University who presided wanted the Government of India to expedite the implementation of the river link project envisaging the linking of 37 rivers and the construction of 3000 storage areas along the way.
A total of 130 tmc of water from 10 rivers including the Cauvery was being wasted into the sea.
If the water wasting into the sea from Godavari, Krishna and Cauvery Rivers could be diverted, it would solve the water problem of Tamil Nadu, Andhra Pradesh and Karnataka.
The three governments should definitely join hands to take up the river link project, he said.

H. Philip, Director, Extension Education, TNAU, Coimbatore said that in the light of the declining income from agriculture due to various reasons, farmers should convert agriculture into an industry in order to increase their income.
They should resort to the making of value-added products such as banana biscuits in order to make agriculture remunerative, he said.
K. V. Rao, Chief General Manager, NABARD, Chennai said that NABARD encouraged the formation of Joint Liability Groups (JLGs) to enable farmers to come together and take loans. It has fixed a target of 40,000 JLGs this year.
Farmers should come forward to start farmersâ€™ companies to make agriculture commercial-oriented and to prevent middlemen from taking away sizable money which otherwise would go to farmers. The NABARD has targeted to form 200 such companies, he said.
G.V. Selvam, Vice-President, VIT said that steps should be taken to address the twin problems of water shortage and labour shortage in agriculture.
S. Tamil Maran, Project Officer, Centre for Sustainable Rural Development and Research Education, VIT welcomed the gathering.
â€˜If the water let into the sea from Godavari, Krishna and Cauvery Rivers could be diverted, it would solve the water problem of Tamil Nadu, Andhra Pradesh and Karnataka.â€™"