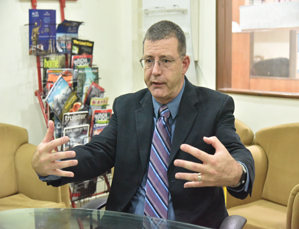 In the last two years, data analysis has been rated as the top job in the world, according to Jeffrey Strickland, a data scientist, and adjunct faculty from George Washington University, United States.

Professor Strickland is now teaching a month-long course in Data Analytics for post- graduate students of VIT University. “The role of a data scientist is to get relevant data, turn it into information for better decision,” he told reporters during an interaction on Thursday. For the last two years, the job of data scientists had been rated as number one in the world, he added.

The field, according to him, had great prospects. “However, presently, there is inadequate number of data scientists in the world. It is a multi-disciplinary job as candidates require skills in computer science, mathematics and statistics. There is a great demand for data scientists now,” he added.

He added that data scientists needed to understand concepts and also know how tools worked. “They need to apply the right technique for arriving at a solution,” he observed. Internationally, there was a qualification exam too to certify professional analysts, he noted. One of the main challenges for data scientists was security of data. “They should know ways to make data more secure. There could be breaches in security and they should know how to keep it secure,” he said.

On his experience of teaching students in India and the USA, he said there was no difference between the two groups. “Students here are very informed and have knowledge about the subject. They have a higher level of thought and prepare for classes,” he said.

“Our school already has 10 adjunct faculty members from USA, Australia, Japan and Europe. The aim is to provide students the expertise of the international faculty members,” he said.