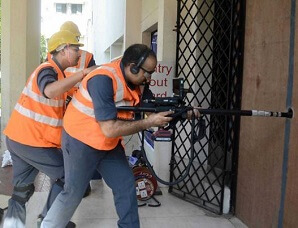 The Center for Disaster Mitigation and Management of VIT conducted a mock drill to create awareness among the students. The National Disaster response Force Commandant M.K. Verma presided. The one day event that happened had students acting as victims during the natural disaster and other students trying to save them.
The presence of the NDRF made this event a huge success by training the students how to respond to various disasters such as earthquakes, floods and cyclones. They had installed cameras in the building collapsing due to earthquake to give the students a better picture. Vice Chancellor Sekhar also released the Emergency Response Plan version III during the course of the event.