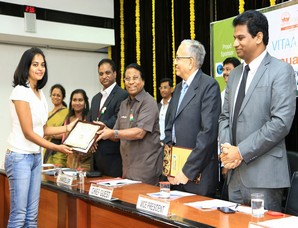 “Participation in National Service Scheme camps instilled a spirit of social service in me and has guided me in discharging my duties as panchayat president”, said K.M. Muniyappan, president of the Kadachanallur village panchayat in Pallipalayam panchayat union in Namakkal district.

He was among those who were conferred the Distinguished Alumni Award 2015 by the VIT University at the VIT Alumni Association (VITAA) Day 2015.

The event was held at the VIT campus here on Monday. A B.E. Civil Engineering student of the 1989 batch, he received the award under the category, `social development’ from the VIT Chancellor G. Viswanathan.

Following are the other awardees who received the awards from the Chancellor:

Mr. Viswanathan wanted the VITAA to create a corpus fund for undertaking social development projects. Higher education contributed to the development of the society and the country.

The alumni should definitely take a lead in social development. VITAA had 14 national and 15 international chapters with a total membership of 44,000.

“The VIT alumni should be model citizens in their respective walks of life and help eradicate malpractices such as tax evasion, amassing black money and corruption which eats into the economy of the country”, he said.

Acharya Ajit, Founder Chairman, `India on the Move’ called upon the alumni to take up an idea, put their heart into it and work for the society. K.K. Giri, Chairman, VITAA welcomed the gathering.