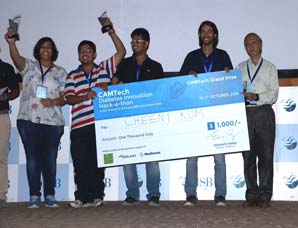 According to a release from the VIT University, two teams from their institution presented different innovations at the event and won prizes each containing 1000 USD. They promise to bring down the cost of the diabetic tests.

‘E-stick’ a device developed by a team led by third year B.Tech.(EEE) student Vipul Arora, a non-invasive device for measurement of blood glucose of diabetes patients, is one of the innovations that won the prize. Akshat Aggarwal, Sakcham Baroliya, Rohit Madhavan and Sahil Sharma were other members of the team.


“E-stick’ will save the patients from the pain of having to go through the pain of pricking themselves every time.

It will also help mass screening of diabetes,” the release says.

The device which is to go for clinical trials soon would cost around Rs.12,000. ‘Sparsh’ is another device that won VIT the prize.

“It has potential to reach patients of primary health centres, nursing homes in Tier-II towns and mobile medical units,” the release said.

Quoting the students a release said that 19.1 per cent of the diabetic population suffer from DPN in India, a leg is lost due to diabetes every three minutes in the country.


Foot complications could be prevented if early screening of peripheral neuropathy was performed.

Simple symptoms like loss of sensation, when followed by an injury, aggravate to ulcer, and improper care of ulcer leads to amputation.


Lack of access to basic screening, high cost of screening and requirement of trained health workers were the roadblocks to early screening of DPN.
‘Sparsh’ attempts to solve all, the release added.