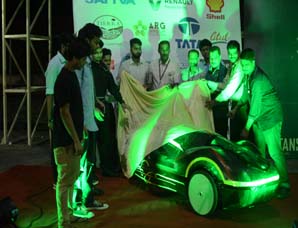 Team Eco Titans is the Official Super mileage Team of VIT University which designs and fabricates super mileage prototypes. The team not only aims to ace The Shell Eco Marathon Asia, one of the most prestigious international competitions but also to build vehicles that will one day represent the automobile industry.

The Team’s most recent innovation is its 2016 prototype, ‘Rudra’ which was unveiled on 5th of November this year. The event was organized in a grand manner in the VIT Vellore Campus. The event was presided over by Dr. Porpatham, Hon’ble Department head for Thermal and Automotive Engineering, Prof Ravi K, Hon’ble Faculty Advisor for the team, Dr. C D Naiju, Assistant Director of Student Welfare and many other SMBS faculties. The event started with a welcome speech by the Team Captain. It was followed by an inspirational speech by the Team’s faculty advisor who supported the team throughout its journey. One of the main highlights of the event was the signature campaign to support the team’s motto of ‘Dreams Go A Long Way’. The event ended with the grand unveiling of the latest prototype by The Chief Guest and the other dignitaries present at the event. The Team Manager, in his vote of thanks mentioned how important it is to dream big and advised the crowd to pursue their dreams, however far the journey to achieving it may seem. Free chips sponsored by the team’s official food partners, Tierra Kappo were distributed and everyone present enjoyed the grandeur of the event

Team Eco Titans is a true inspiration to the whole student community out there. It sends the message out loud that one should be just passionate enough to achieve its goal. Passion drives the world and nothing is impossible if you are determined to make a difference. Kudos to the team!