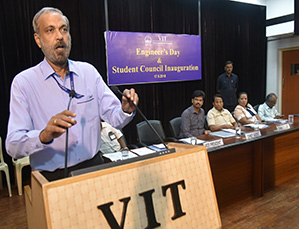 `India can contribute engineers to all countries’, says VIT Chancellor

With many countries in the world facing shortage of engineers, India is in a position to contribute engineers to all the countries of the world, according to Dr.G. Viswanathan, Chancellor of Vellore Institute of Technology, Vellore. Presiding over the Engineers’ Day celebration and the inaugural function of the Students’ Council at the VIT premises on Monday, Dr. Viswanathan said that the population is declining in about 50 countries, as a result of which they will have to look to India or China for workforce. India, and particularly VIT, can contribute engineers to all the countries. Refuting the claim that employment opportunities were declining for engineers, he said that engineers can always survive. Every country requires engineers for its development, he said, and offered the help of VIT to Madagascar for the development of its growing economy. “We will send engineers from VIT to Madagascar for this purpose”, he said. The Chancellor wanted the Students Council to act as a bridge between the management and students of VIT.
Engineers’ Day is celebrated every year on September 15, the birth anniversary of Sir M. Visvesvaraya, known as the Father of Engineering, in order to commemorate his contributions to the field of engineering in India. He is credited with having built the Krishnaraja Sagar Dam in Karnataka and designed flood prevention systems in that state.
The twin function of Engineers’ Day and the inauguration of the Students Council at VIT was marked by a power point presentation by Mr. Sudhansu Mani, General Manager, Integral Coach Factory. He gave a glimpse of the engineering feats and the eco-friendly measures achieved at the ICF in the last 63 years since its inception. Mr. Mani said that the first Make-In-India train which is designed for a speed of 160 km per hour will soon replace the Shathabdi Express. The ICF has so far produced 60,000 coaches, and is expected to produced 3200 coaches this year. “All our coaches are carbon-negative, and are produced with renewable energy”. The ICF is the only workshop in the Indian Railways which has introduced 100% biometrics which has done away with absenteeism and proxies, he said.
Her Excellency Razanadrasoa Marie Leontine, High Commissioner of Madagascar to India wished that VIT should impart technical education to the students of Madagascar. She noted that 85% of men and 79% of women in India show interest in engineering, which thus accounts for the largest number of engineers in the world. The High Commissioner said that bilateral relations between India and Madagascar have improved after the visit of Mr.Ram Nath Kovind, President of India to that country.
Dr. Anand A. Samuel, Vice-Chancellor of VIT wanted the students to have the practice of using digital codes and standards. Companies expect the students whom they recruit to digitize themselves. Dr. S. Narayanan, Pro-Vice-Chancellor of VIT wanted the students to be creative and innovative in order to become good leaders. They should develop the practice of not only participating in conferences and seminars but also organizing them, he said.
Mr. G.V. Selvam, Vice-President of VIT honoured the guests with mementos. Dr. Amit Mahindrakar, Director, Students’ Welfare introduced the members of the Students Council. Dr. A. Ruban Kumar, Assistant Director, Students’ Welfare proposed a vote of thanks.