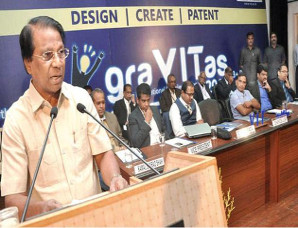 Entrepreneurs need to have the zeal to go after the pains of society and find solutions, and collaboration with others will help us address conflicts, Rajiv Vaishnav, vice-president, Nasscom, said speaking at the inauguration of the three-day graVITas '15 at the VIT University.

Purush Vankireddy, General Manager at Microsoft, said the company was looking at ways of promoting a culture of innovation within the company. “It is hard to innovate because of our minds. We know we are capable of inventing but our mind also is capable of restricting it,” he said, while explaining about human behaviour during innovation.

Delivering the presidential address, G. Viswanathan, Chancellor, VIT University, requested the government to recognise institutions that promote innovation.  “We are trying to introduce a number of innovations in teaching-learning experience,” he said. On the institution’s achievements, he said the number of articles published by their professors and students had gone up considerably. “In the last 2-3 years, PG students have been able to go in for publications of their papers. Now, even graduate students are being encouraged to publish,” he said.

An app for Vellore was launched by the university on Friday. Rishav Shaw, an Apple-recognised team admin, and five other team members developed the app to help people visiting Vellore.  “Suppose, you reach Katpadi by train, all you need to do is use the app to find accommodation, hotels and eateries, bus timings and routes, cab services, theatres, tourist places,” Mr.Shaw, a third-year B.Tech student at VIT, said.

The app will help people compare the best rates and ratings of cab services in Vellore and make a decision accordingly. It will also allow people to rate the quality of food at restaurants, he said.   The team, which developed the app in about three months, plans to update the app with additional details such as hospitals, police stations and emergency services in the next one and half months.

A 3D printer developed by Botzlab Innovations was unveiled at the event. The portable 3-D printer, termed ‘ICE’- Ideate, Create, Exhibit, has been developed to cater to the student community. “This presents immense opportunities for students to see first-hand what they are developing, while also seeing massive cost savings,” Pingnagan Pranavam, founder and CEO of the company said.