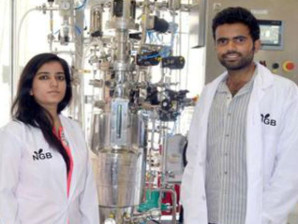 What started as a beer-making competition turned into a experiment to come up with a healthy alternative, figuring out a way to use the principles of fermentation.

It all started with an innocent entry to a beer-making competition! The experience gained in the brewery sparked off a bright idea that got the VIT Alumnus Arjun R. Krishna (25) and Damini Mahajan (24) a funding of Rs. 50 lakh from the Department of Biotechnology, Government of India.

The innovative idea of the bio-technology graduates was to ‘ferment’ a health drink that will provide adequate amounts of vitamins and minerals without any preservatives and sugar. The youngsters figured out a way to use the principles of fermentation and brewery and concoct a health drink with a fruity taste that promises to instantly replenish vitamins and minerals in the body.

Buoyed by the positive reception to their idea from DBT, they have also launched a start-up ‘Naturlich Global Beverages’ and are working day and night in the incubation centre of BITS Pilani, Hyderabad, to scale up production of their health drink. “We are also looking to employ experienced persons having background in industry biotechnology and microbiology,” they say.

Whatever success they have achieved, they owe it to the failures on earlier occasions, they say. “It took a lot of energy and hard work to convince DBT. In fact, on our first attempt, our idea was rejected because we did our research in University of Sheffield (UK) while DBT officials insisted that we should have a product suitable to Indian conditions. We returned to BITS Pilani, Hyderabad, and developed our product and presented it to DBT again. The second time, we were lucky,” recalls Arjun.

In their lab, Arjun and Damini were able to produce the health drink in small quantities (1 to 2 litres). “We took our health drink to New Delhi and served it to the selection committee of DBT. They liked and it and acknowledged that it has promise. With the funding of Rs. 50 lakh, which we received last month, we are trying to scale up production to at least 10 litres,” says Damini.

So, after snagging funds worth Rs. 50 lakh under Biotechnology Ignition Grant of DBT, what’s in store in coming years? “We want to scale up production to 100 litres and vie for the next level of funding from DBT for our project,” they chorused.