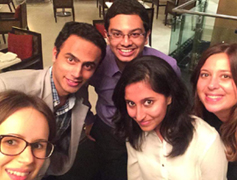 Mohammed Kamal Khwaja, a final year B. Tech student majoring in the field of Electronics and Communication Engineering won the KTH Master’s Challenge 2016 conducted by the prestigious KTH Royal Institute of Technology, Sweden.

Mohammed came first in the Wireless Systems track and was also awarded a full scholarship of INR 23,00,000 to pursue a master’s course at the KTH Royal Institute of Technology, Sweden.
The KTH Master’s Challenge involves numerous stages, After undergoing numerous quizzes, essays, and interviews, Mohammed was declared one of top 3 students in India in December 2015. The positions of the top 3 prize winners were to be announced at the prize ceremony on 22 January 2016.
Currently in Singapore pursuing his final year project at the Singapore University of Technology and Design, Mohammed was flown to Bangalore from Singapore for the prize ceremony held in the presence of senior professors of KTH and global heads of companies like ABB and Scania.