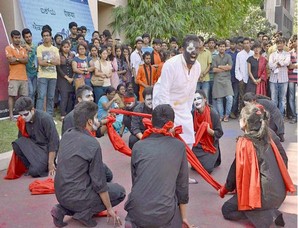 Amidst numerous contests and games, students gave voice to social issues such as child labour and female foeticide through a walkathon and went on to portray the country’s cultural diversity in a parade at VIT University’s Riviera 2015 on Friday.

As the international sports and cultural festival entered its second day, about 100 to 150 students walked the roads of the university to spread the message to stop child labour, female foeticide and child trafficking.

“This is a protest march against child labour, female foeticide and child trafficking. We had three musical skits. This walkathon is a regular feature during Riviera,” said Neerav N. Gala, a student and board member of Bangalore-based NGO Juvenile Care, VIT branch.

The day’s main highlight was the cultural parade under the banner – “Aikya” (unity). Students, representing various cultures were part of the parade to showcase the country’s diversity, said Jewel, committee coordinator of Events and Culturals.

“About 15 to 20 different cultures were showcased. This is in line with Riviera 2015’s theme —“Colours of India”. Students represented various States as the campus itself has students from every State in the country,” she added.

Students dressed up in the respective State’s traditional attire, showcasing the culture’s uniqueness by way of dance and music and also through martial arts.

Enthusiastic students surrounded the venue of “Khalbali”, a street play contest. Anurag Murugesan, member of VIT’s dramatics club, said it was a platform for participants to bring out their creativity.

“They are judged based on visual appeal, slogans, energy and performance,” he said.

Music of different genres filled the air at Greenos, the venue for the four musical events at Riviera. Like last year, the events lined up were – Acoustic Vibes, Resonance, Raaga Reggae and Super Singer.

The Hindu is the media partner for Riviera 2015.