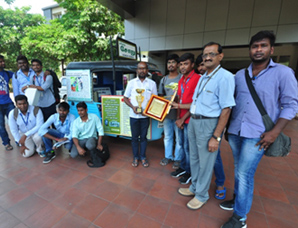 
“I grew up in a poor family. There was not enough food at home. I looked forward to the mid-day meals they provided at our school,” said Raja, founder of Pasiaara Soru (Filling Meals for the Hungry), addressing the students and faculty members of the university after receiving the award.


Having experienced hunger as a child, he became empathetic to the sufferings of poor people when he grew up.

When he came to know that many attendants of poor patients at the government general hospital in Coimbatore were starving since they had no money for buying food, he decided to help them.


He started collecting leftover food at family functions and from hotels and gave it to them. He is involved in this service for more than 15 years. Today, many hotels and wedding halls inform him when they have surplus food.


He uses an auto, donated by a well-wisher, for ferrying the food from the donor’s place to the hospital.

“Some of the attendants stay with the patient for many weeks. They do not have proper clothes to wear. I collect old clothes from the public and distribute it to the needy persons in the hospital,” said Raja.


The 44-year-old Good Samaritan also works with HIV patients at the antiretroviral (ART) Centre at Coimbatore GH and children affected by the disease staying in a home in the city.

“HIV patients need love and care, but society shuns them,” he said, and recalled an incident when a woman at a village near Coimbatore broke down when he carried her two-year-old child. Both mother and child were HIV positive.

“Nobody had carried her child until then,” he said.