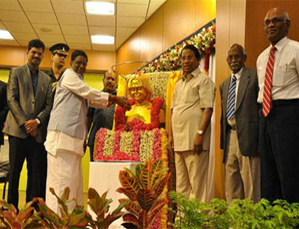 Setting aside protocol, Governor of Meghalaya V. Shanmuganathan made it a point to accompany the mortal remains of a person, who he describes as the “greatest visionary of India” – former President A.P.J. Abdul Kalam.
It was on July 27 last year that the country’s “Missile Man” collapsed while delivering a lecture at IIM-Shillong.
After being declared dead by doctors, his mortal remains had to be flown from Guwahati to Delhi when the Governor wanted to be part of his final journey.
“This is when the issue of protocol came in. I told the officers that he (Mr. Kalam) is still living in me, with thousands and crores of people in the entire country. He is not dead. I am accompanying the greatest visionary of India,” he told a gathering of students at VIT University where he unveiled a statue of the former President on Tuesday.


In his speech that followed, the Governor went on to address several issues troubling the country including corruption, insult to women, dowry, untouchability and ill-treatment of Dalits.

He posed a challenge to students to take a pledge not to receive any bribe in their life. “There are certain basic things that need to be addressed. Corruption prevails across States, and this is a challenge before youth to save the country’s image and make it free from corruption,” he stressed.
The Governor emphasised the need for the country to respect women.


“Women are insulted in different parts of India. We should create an atmosphere where women are respected. If you have real guts, marry without dowry,” he asked the students.


Some people feel high, while some are made to feel low, he said, adding, “We want to free Indian society from untouchability, and there should be no ill-treatment of our Dalits.”
He appealed to the youth to build India that is free from corruption, untouchability, dowry and turn it into a country that respects women.
“The world should look towards India for education, health, trade, commerce and also values, and this should be your dream,” he said.


VIT chancellor G. Viswanathan raised the need for India to become a disciplined country. “There should be discussion and dialogue in Parliament that can pave way to discipline,” he said.