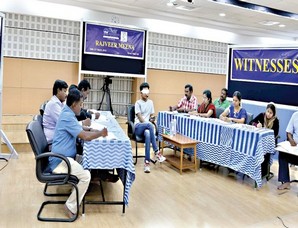 VIT Chancellor G Viswanathan said, “We took the initiative to encourage our alumnus who was interested in breaking the world record by providing support.”

Twenty-five-year-old Rajveer Meena, a native of Morchala village of Sawaimadhopur district in Rajasthan on Saturday was able to memorise 70,000 digits of the mathematical value of Pi. His memorisation was videographed and documented in the presence of 13 witnesses (representatives from media, NGOs, social organizations, professionals) and 20 professors from the VIT University and other colleges. While the world record for this is being held by Chao Lu of Shaanxi province in China in 2005 for memorising 67,890 digits of the value of Pi recited in 24 hours and eight minutes, Rajveer has made an attempt to memorise 70,000 digits in just nine hours, seven minutes.

Meena, while he was a student of VIT, has already found a place in Limca Record book when he was able to memorise 1,125 random mobile numbers in the year 2011. He broke the record of one Nishant from Andhra Pradesh who had set a record of recalling 840 random digits. Hailing from a remote village in Rajasthan, Rajveer said that he got interested in memory feats when he was not able to perform well in his studies in the school. He began to develop his own method of associating numbers with an image of a colour, person, an event or an object to recall sequences of numbers. This had greatly helped him improve that was evident from his good performance in the school examinations and later in the VIT University.