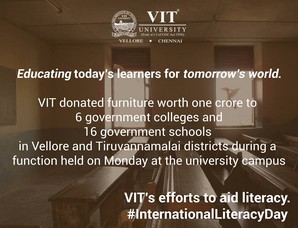 The programme is being implemented to help in improving the standard of government elementary, high and higher secondary schools in the two districts.

Free desks, chairs, computer equipment and note books were being granted under the programme, and it has been expanded to include colleges too, a press release said.

There was shortage of teachers, he said, and added that adequate number of teachers should be appointed to educational institutions and trained well.

He also called for change in the education system and curriculum on par with Central Board of Secondary Education. The education system that is being implemented in developed countries should be brought to India. In developed nations, educational institutions function for 14 hours a day, and have 260 working days in a year, he noted, the release added.

The Chancellor also highlighted the need to increase research activities for which the government should provide more funds and autonomy to colleges.

At least 10 per cent colleges should be granted autonomy in a year, he added

G.V. Selvam, vice president of the university, said industries should adopt schools in their vicinity and provide the required amenities. By doing such things, students in the locality will get education with basic facilities and it will also help in the society’s development.

A total of 2,539 steel tables - with one to three seat capacity - were granted to six government colleges and 16 high and higher secondary schools, including schools at Pudurnadu and Jamunamarathur, for 4,968 students in the two districts. The furniture was worth Rs. 1,03,18,300, the release stated.