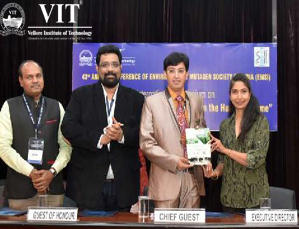 Impact of Environmental Mutagenesis in the Human Genome

A three-day International Conference on ‘Impact of Environmental Mutagenesis in the Human Genome’ began at VIT on Thursday. Principal Health Secretary, Government of Tamil Nadu, Dr. J.Radhakrishnan inaugurated the event.

Sandhya PentaReddy, Executive Director of VIT, who presided over the function, in her address, said several academicians, experts in the field of Environmental Mutagenesis from premier research organisations and universities from United States, Germany, Brazil, Bolivia, Australia, Taiwan, Uruguay, Singapore, Austria, France, Canada, Portugal in addition to the host nation India were taking part in the three-day International Conference. 50 research papers in changes in gene structure, cancer therapy had been submitted so far. Ms. Reddy said research work in the areas of biotechnology and advanced life sciences and alternative medical research were being taken up at VIT. She said that it was laudable to note the contribution of researchers and scientists to protect the society from the impact of diseases.

According to her, people were affected by cancer due to exposure to certain chemical substances released from chemical, plastic and crude oil factories. To prevent people from cancer, it was important to prevent pollution and cancer causing substances from affecting the environment. Ms. Reddy added that it was heartening to note that the Environmental Mutagen Society of India was working towards this endeavour.

Dr. Radhakrishnan, who lit the traditional lamp and delivered the inaugural address, said that C.M.C. Hospital, VIT and Government Medical College in Vellore were providing yeoman’s service to the people through their science education. Through their research, they were bringing about a “knowledge change.” He said that earlier, findings of research had to be registered in a book before being sent to others, but now, they could be sent immediately through E-Mail and Facebook.

The International Conference being held at VIT was a very important event. He said that chemical pollution was resulting in the human body being affected with diseases like cancer. Cancer was caused due to hereditary factors through the genes and also through contamination caused by chemicals. The Environmental Mutagen Society of India was doing tremendous work through alternative medical research and treatment to prevent occurrence of cancer. Alternative research in medicine would help in spread of diseases and stem cell research too could contribute to finding solutions for ailments.

In Tamil Nadu, all hospitals were equipped with all the facilities required to provide medical services. At present, people could avoid going to big hospitals in towns and instead avail all the required treatment at Primary Health Centres in villages. These PHCs were stocked with adequate medicines and vaccines, Dr. Radhakrishnan said.

According to the Principal Health Secretary, people should look after environment and protect it so that diseases are prevented from being contagious and also to ensure that they do not occur in the first places. Dr. Radhakrishnan said that the scholars taking part in this three-day International Conference should exchange the findings and protocols with each other.

Earlier, Ms. Reddy released a special souvenir about the Conference on the occasion and the first copy was received by Dr. Radhakrishnan. Dr. K.B.Sainis, President of EMSI and Abhilesh M.Gunasekar, Founder and CEO of Kyvor Genomics were among others who took part on the occasion. Dr. Radha Saraswathi, Convenor, thanked the gathering.