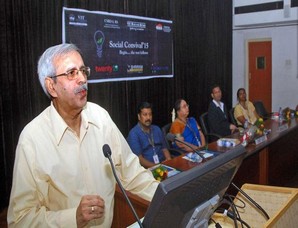 The four lions in the Lion Capital of Ashoka, the official emblem of India can be re-interpreted in the modern context to represent the forces of Market, State, People and Self to usher in social transformation in the country, said Subash Sharma, Director, Indus Business Academy, Bengaluru.

Speaking on the topic, `Social Transformation through Social Convivial Approach’ at the inaugural function of the 3-day Social Convivial’15 organized at the VIT University here on Friday, Mr. Sharma said that while three lions in the Ashoka pillar are visible, the fourth lion is hidden. “This hidden lion is the self which is hidden in you. This hidden lion should be brought out for social transformation through a non-violent approach”.

Kalyani Rangarajan, Dean, VIT Business School said that the divide between the haves and have-nots is going to widen in the years to come. The youth have to play a leading role in bridging this divide. “We need a socially responsible private sector and civic society in order to achieve this”, she said.

Megha Harumalani, student organizer said that SoCon’15 is a platform for all change-makers in the country to showcase and display change-making ideas, creativity, inventions, resourcefulness and start-ups that can help in making this world a better place to live in.