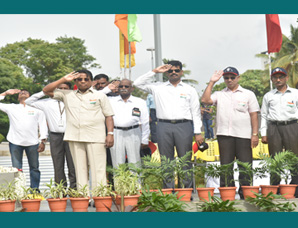 The Chancellor of the Vellore Institute of Technology Dr. G. Viswanathan has urged the central government to
introduce a national scholarship scheme to ensure access to higher education to all those who are eligible and aspire for it, and thereby improve the gross enrolment ratio (GER) of the country.
Delivering the Independence Day address after unfurling the national flag at the celebrations organised at the VIT campus here on Wednesday, Dr. Viswanathan said that our literacy rate, which was 18% during Independence, has increased to 74% in the last 71 years. “Though we are doing well in school education, there is a lot to be done in respect of higher education. India’s Gross Enrolment Ratio—the ratio of the youth in the relevant age group who are pursuing education—is just 25%, whereas it ranged between 50% and 100% in the advanced countries”, he said.
The Chancellor said that out of the 14 crores of children who are eligible for higher education, India could accommodate only 3.5 crores. While 13 lakhs of candidates applied for undergraduate medical seats, only 60,000 seats are available in the whole of India. This led to corrupt practices in medical admissions.


Dr. Viswanathan wanted India to ensure good employment to all able-bodied persons so as to facilitate the growth of the country. Tough measures should be taken against crime and corruption, as in China. He wanted the students to take steps to improve the quality of democracy and elections in India, and bring about the necessary change to end the menace of black money and corruption. Youngsters alone could bring about these changes, he said.
The Chancellor said that India has overtaken France ($ 2.58 trillion) in gross domestic product (GDP) with a GDP of $ 2.59 trillion, attaining the sixth position, next to U.S., China, Japan, Germany and U.K. “If all of us work hard, we can compete with the above five countries”, he said.


Earlier, Dr. Viswanathan took the salute at a marchpast by the NCC cadets and the VIT security force. He also distributed free bicycles to 10 outstanding students admitted under the Support The Advancement of Rural Students (STARS) Scheme. He flagged off a rally of race cars, planes and rockets designed by the VIT students.