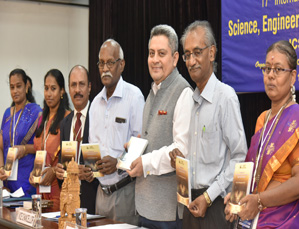 The two-day annual International Conference on Science, Engineering and Technology began at Vellore Institute of Technology on Tuesday. The ICSET 2018 – the 18th International Conference on Science, Engineering and Technology, organised by the VIT School of Building Science, was inaugurated by Mr. Hector Cueva Jacome, Ambassador of Ecuador to India. More than 2,000 scientists, young researchers, academicians, experts and students from different parts of the world are taking part in this Conference. S.K.Sekar, Dean of School of Building Science, welcomed the gathering at the inaugural address of the Conference held at Dr. Chenna Reddy Auditorium. Professor Meena, event coordinator outlined the objectives of the Conference. In his address while presiding over the Conference, Professor Anand A Samuel, Vice Chancellor of VIT, said that that their institution accorded top priority to research. To prepare students for a career and a life ahead of them in the area of research, the faculty at VIT trained students here in research from the second and third year onwards itself, he said and that over 3,000 students were engaged in research at VIT and that the institution was credited with publishing with the maximum number of research papers in science journals among all educational institutions in the country. Dr. Samuel said that over 1,000 research papers were submitted for presentation in this annual conference on Science, Engineering and Technology and 998 among them were selected to be presented here. He said that there were over 60 Universities in Ecuador and that next year, VIT would enter into a Memorandum of Understanding with some of those universities. Mr. Hector Cueva Jacome, Ambassador of Ecuador to India, inaugurated the conference and released a special souvenir released on the occasion. In his address, he said that he was delighted to inaugurate the international Conference on Science, Engineering and Technology. He said India was trying through various means to become a superpower at the world level. He said that there was no doubt that India would become a superpower considering that it had resources for developing its potential in the areas of science and development of its inherent talents. Mr. Hector Cueva Jacome said that India had witnessed phenomenal growth in the area of Information and Technology in the past 6 years. It had reached such an extent that it could be adopted by many other countries in the world. He pointed that some of the experts in several countries in the world in the area of information and technology were from India. Similarly, India had witnessed several advancements in the area of medical research. He said that Yoga and Ayurveda, that guaranteed wellness of the human body, had also become very popular all over the world. India had witnessed developments in the agriculture sector too and this sector had employed continued to employ the maximum number of people. A lot of innovative measures were being applied to improve productivity, he said. Mr. Hector Cueva Jacome, added that an estimated 1.6 crore people were engaged in the information and technology sector and a lot of importance was now being given to digitalisation of all sectors be it E-Medicine, E-Commerce, E-Governance. The number of people who were engaged in research in these sectors was huge, Mr. Hector Cueva Jacome, added. Among others who took part in the inaugural function included Professor S.S.Narayayan, Pro Vice Chancellor, S.Parimala Ranganayaki and A.Sobi.