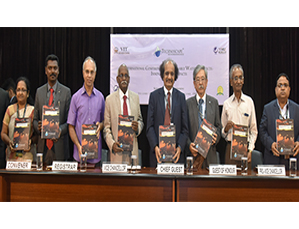 A three-day International Conference on Sustainable Water Resources – Innovations and Impacts – Technoscape – 2018, began at Vellore Institute of Technology on Friday. Padma Shri G.D.Yadav, chemical engineer and inventor and Vice Chancellor of Institute of Chemical Technology, Mumbai, inaugurated the three-day event. Meguru Kaminoyama, Professor at the Faculty of Engineering, Division of Materials Science and Chemical Engineering, Yokohama National University was the guest of honour.

More than 60 international delegates, including scientists, research scholars, experts and industry representatives from Indonesia, Japan, Taiwan, Poland, Germany, France, Malaysia and Singapore and United States of America in addition to the host nation India are taking part in this international conference organised by the School of Chemical Engineering of VIT and Yokohama National University. The objective of the international conference is to shed light on crucial issues relating to the judicious use of water, developing the infrastructure of water supply systems, desalination, technology to harness industrial water for general purpose and water recycling among others.

Professor Sishir Kumar Behera, Dean, School of Chemical Engineering, VIT, welcomed the gathering. Mahesh Ganesa Pillai, Conference Organiser, outlined the objectives of the three-day international event. Presiding over the function, Professor Anand A.Samuel, Vice Chancellor of VIT, handed over the award of excellence and lifetime achievement award to Mr. Yadav. Addressing the conference after releasing a special souvenir released on the occasion, Mr. Yadav said that research activity occupied a vital and important role in the growth and development of science and technology in today’s world. He said that he was happy to note that VIT was involved in exchange of activities, especially research in science and also for imparting top quality higher education to its students.

Mr. Yadav appreciated VIT for entering into pacts with frontline universities in the world towards this endeavour. He said that water was indispensable and that without water, life could not be sustained in this planet. Without water, living things would perish and hence water management was most important. This was one area where the role of civil, mechanical and chemical engineers was most crucial. At a time when water levels were depleting, it had become most important to conserve and protect water resources. Of the total power supply requirements, coal was contributing to about 72 per cent. This resulted in large scale pollution and contamination of natural resources. In the next stage, water would contribute to generation of power and hence, a lot of water was essential.

To meet the requirement of drinking water in today’s world, sea water was being desalinated. In many places in Chennai, desalinated water was being supplied to people for their drinking water needs. The next stage would be conserve rain water, Mr. Yadav said. Due to the absence of proper water management in Kerala, massive quantity of water was being simply wasted and it drained into the sea. To prevent this, inter-linking of rivers was most essential, he said. He recalled that when Atal Behari Vajpayee was the Prime Minister, he spoke about the importance of inter linking of rivers and brought in a scheme to implement it. However, this scheme could not be carried forward due to slackness and lack of interest for the same. China has implemented linking of rivers and India too should implement a similar project. Proposals for this project should be designed by researchers and engineers, Mr. Yadav added.