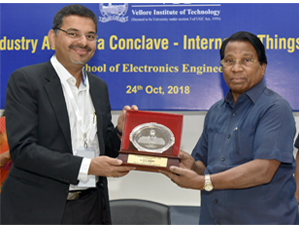 Internet of Things ‘2018 – an Industry Academia Conclave began at Vellore Institute of Technology.

R.K.Shenoy, Senior Vice President at Robert Bosch Engineering and Business Solutions Private Limited, inaugurated the event.
Organised by the School of Electronics Engineering – SENSE, the inaugural event of the Conclave was held at Kamaraj Auditorium. More than 300 academicians, industry representatives, experts, young research scholars and students took part. Speakers would be talking about and also exchanging ideas about cloud computing, data analytics, security and block chain. Elizabeth Rufus, Dean of SENSE, welcomed the gathering. M.Arun, event coordinator outlined the objectives of the Conclave.
Presiding over the function, Dr. G.Viswanathan, Founder and Chancellor of VIT, said that the Industry Academia Conclave was being held at VIT for the second year in a row. He said that VIT had very good ties with the industrial sector in the areas of research and industrial production. Towards this endeavour, VIT had tied up with over 1,000 industries and in addition to this, had also taken up research that was required for these industries. Further, they also provided opportunities for people in these industries to take up research at the University.
Dr. Viswanathan said that such industrial – academic tie-ups would pave the way for devising means to increase industrial production and also to establish new methods to devise low cost means while at the same time implement high-end technological processes in industrial production. Along with an increased output in the agricultural sector and growth of industries, India would become a developed nation, Dr. Viswanathan said. He was of the view that the industries should approach educational institutions and work along with them so that they could solve the problems of their end customers.
In his address, Mr. Shenoy said that it was very important for industries to work closely with educational institutions for increasing production and also for creating new innovations. The impact of these findings will significantly improve the quality of life of people. He said that there were many industries that were struggling to devise new means of production, Mr. Shenoy said, adding that such Conclaves would help in addressing the problem.
Among others present on the occasion were Anand A.Samuel, Vice Chancellor of VIT and Anil Prakash, General Manager, Training and Development, Global Mobility, University Relation of Robert Bosch. Event coordinator Professor P.Karthikeyan thanked the gathering.