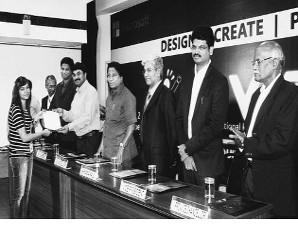 ‘Ministry of Defence will bring out a list of areas where components can be produced indigenously’ The three-day graVITas’ 2015, the International Knowledge Carnival conducted by VIT University, Vellore, concluded at the VIT campus here on Sunday with a call by G. Sateesh Reddy, Scientific Advisor to the Defence Minister, Government of India, for greater funding by the Central government for relevant research in educational institutions.
Delivering the valedictory address of graVITas, Dr. Reddy said R & D organisations, such as the Defence Research & Development Organisation, could entrust relevant research to certain departments in educational institutions, and make four professors responsible for the work and come up with the best manufacturing methodologies. “There is nothing that the DRDO or the Department of Atomic Energy can do without academic institutions and their research”, he said.
The Scientific Advisor said that the Ministry of Defence will soon bring out a list of areas where components can be produced indigenously for the defence and aerospace sector to reduce imports in tune with the Prime Minister’s ‘Make In India’ campaign.
Pointing to the immense scope for small industries to manufacture components for the defence and aerospace sector, he said only two companies were manufacturing aerospace fasteners in India.
Dr. Reddy said that the country should reduce its imports from the present 60 per cent to about 10 to 15 per cent through research and innovation. “You can either ‘make in India’ or produce new materials through tie-up with a foreign company. “Design and make in India should be your aim,” he told the students, adding that they should concentrate on research and production of commercially viable products in order to get the patronage of the industry.
Budget for research
G. Viswanathan, VIT Chancellor, who presided, urged the Government of India to increase its budget for research. India spent only 0.85% of its GDP (Gross Domestic Product) on research, as against 4.2% by Israel, which leads the world, and 2.85% by the U.S. “It is necessary that we should be able to innovate and manufacture within India. Universities should take the lead in research along with research organisations.
“We have lakhs of young minds who can work wonders if they concentrate on research,” he said, and requested the Scientific Adviser to ensure that the Ministry of Defence identifies educational institutions with research potential and provide research funding to them.
Applications for seven patents – born out of ideas originating from graVITas’ 2014 – were released on the occasion, true to the theme of the event, ‘Create, Design and Patent’.
P. Shyama Raju, Chancellor, REVA University, Bengaluru, congratulated VIT University for producing eminent engineers.
K. Kannabiran, Director-Students’ Welfare said that 27,000 students from 1300 colleges participated in graVITas’ 2015. A total of 126 events were held, and 106 industrial experts participated in the event.
The Hindu was the media partner for the event.