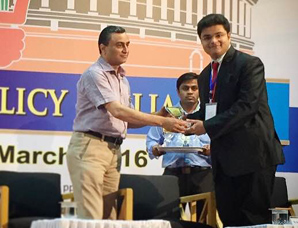 Kunal .S. Joshi bagged A Special Mention Commendation Award for his Robust Policy Recommendations at The YUVA BHARAT POLICY PARLIAMENT Organised by PPRC- "Public Policy Research Centre" - which is one of the main Think Tanks of the Government Of India and the PMO-Prime Minister's Office for Policy Making and Research.

This prestigious consortium was organised from 19th to 21st of March at RMP Campus , Mumbai , for which 65 candidates were selected throughout India from various Universities and Institutions out of a huge 1500 plus applicants by a thorough 3 level selection procedure.


The whole idea of the event was centralised to attract the best youth brains throughout the nation and to utilise their recommendations and ideas towards the successful implementation of two ambitious undertakings by the Government of India, both being " Make In India" and " Swachch Bharat Abhiyaan". The Chairman and the Executive Board of the committee involved people from NITI AYOG, New Delhi.


The Policy Formulated and recommended by the committee was - "Infrastructure , Entrepreneurship and Environmental Policies under MAKE IN INDIA ." which involved deliberate discussions and debates over the above mentioned issues into its minute details over 3 days which even lasted till 12:00AM in the night, all of it had one single aim , that being Providing a Robust and Vigorous Policy to the Nation.
The 8 Recommendations given by Kunal in the areas of Smart Cities and Manufacturing Sector and Skill Development were included in the final draft without any Amendments and were highly applauded and are inculcated in the formulated final policy which will be sent to the Prime Minister's Office , New Delhi.


Kunal received this award in the presence of Hon'ble Governor of Maharashtra Shri CH. Vidyasagar Rao .
Kunal has had previous experience of winning awards at National Level Youth Consortiums and this is just an additional feather in his cap .