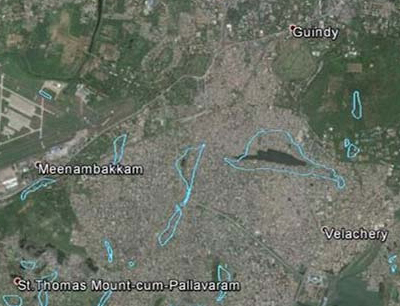 Ganapathy Pattukandan, a disaster management expert, said that lack of real time satellite data is slowing down rescue and rehabilitation efforts.
Ganapathy, a faculty at the Centre for Disaster Mitigation and Management, at Vellore Institute of Technology (VIT), has mapped the missing lakes of Chennai, which existed in the 1970s, but have now become residential areas – one of the major causes behind the flooding situation in Tamil Nadu.

This seismologist said he has found it increasingly difficult to access real time satellite data, which is vital to rescue and rebuilding operations. “Real time satellite data is very important for rescue efforts as they give a bigger picture of the situation. Now, all the rescue operations have been through word of mouth and people calling out for help. But what about those who don’t have access to mobile phones, due to lack of electricity during the rains? Real-time satellite data can point out the intensity of flooding in the areas and can help concentrate rescue efforts. But the lack of such data can drastically slow down these rescue efforts,” he explained. Ganapathy also added that satellite data can help in rehabilitation work. “This data can be used to identify the extent of water-logging. Once the areas are identified, the excess water can be drained. This data can help us renovate our drainage systems and modify urban planning. In the long run, effective drainage can avoid many similar problems in the future,” he pointed out.