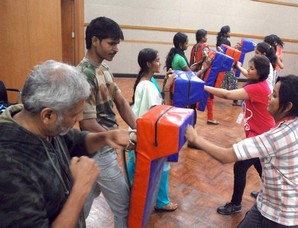 It has become necessary for young girls, especially those working in IT companies in these days to learn self-defence techniques in the light of their vulnerability to violence and sexual abuse either at work place or while returning home from their work places in the night.

Under these circumstances, VIT University, Vellore, has made the learning of self-defence techniques compulsory for its first year girl students who are staying in the hostel at the initiative of Sekar Viswanathan, vice-president of VIT.

Training for the first batch of 800 students staying in the hostel commenced at the VIT campus here on Saturday. The training would be held in two batches, with 400 students each being trained in the forenoon and afternoon sessions.

S. Sreeram, Coordinator/Instructor, Chennai Chapter, Krav Maga, International Krav Maga Federation (IKMF) who taught the techniques to the students told newspersons that Krav Maga, which is an Israeli self-defence system is not based on the physical strength or power of the student, but based on the weakness of the human body. It is purely a self-defence system which teaches the girls the minimum techniques required to save themselves from being attacked or sexually abused by foiling the attempt of the culprit and escaping from the scene. The system teaches the students to use their common sense and the weakness of those parts of the human body which are used by the opponent, and avoid attack or abuse.

The Krav Maga coordinator said that he was initially imparting self-defence techniques to police personnel and prison warders. But, after the notorious Delhi gang rape case in December 2012, he has been invited by corporates and IT companies to impart self-defence techniques to their women employees. VIT has invited him to impart the techniques in a systematic way through a full course comprising seven weeks, at the rate of one day per week, and three hours per day per student.

S. Narayanan, Pro-Vice-Chancellor of VIT, said that the management of VIT is bearing the cost of self-defence training for its students. While the training has been made compulsory only for first year hostel students in this semester, it would be extended to the senior students and day scholars from the next semester.

Anita Maheswaran, of Chennai studying third year B.Tech. Biotechnology, who learnt the techniques two years ago, said that the training has given her the confidence to foil any unlawful attempt at inflicting injury on her by anti-social elements. Anita said that she is practicing the techniques with friends regularly. She would also advise the fresh students to practice the techniques regularly so that they can be used when needed, she said.