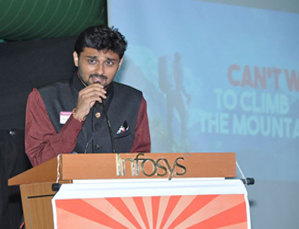 In a feat that has now gone into the India Book of Records, a student of VIT University, Vellore, Navaneeth V Ganesh, has become the Youngest Distinguished Toastmaster in India and fifth in the world.

At age 22, Navaneeth has achieved what no Indian student ever has after clearing all the tracks that adjudge a participant’s level of achievement in both communication and leadership.

“I joined VIT University’s Toastmaster club as soon as I joined the university,” said Navaneeth, who was pursuing an integrated double major course in BTech + MTech and the MBA programme. The Coimbatore resident has cleared his MBA already and is now pursuing his MTech, which he will wrap up by next year. “I cleared all the tracks of Toastmaster within 4.5 years, although it can be achieved in up to a maximum of 15 years,” he added.

The young genius joins the 15,000 DTMs across the world. “Through this club, I was fortunate enough to get an international exposure and interact with genius minds across the world. I also delivered speeches and displayed leadership skills at various occasions throughout my journey and it has been possible with the continuous support of VIT University.”

With a 9 point score (out of 10), Navaneeth did not have to attend all the classes and was given the privilege to simply sit for his exams. “I did not attend classes and only came to give the exams, this gave me enough time to concentrate on other activities such as DTM that helped me develop my soft skills,” he said.

He added that because of this privilege and his keen interest in DTM, he was able to take the number of TM clubs from one with just 9 students to 15 clubs with the total strength of 350 TMs in VIT University.

“We plan to take this to small villages in and around VIT University so we can help other students develop communication, leadership and public speaking skills.”

Having achieved one of the highest academic feats, Navaneeth notes that this ‘privilege’ has helped him to not only network with employees of high profile MNCs, but also get job offers and meet leaders of various prominent companies.

“Even as a student I got the chance to lead a team of employees from a famous MNC and it is exposure such as this that has helped me though my journey,” he said.

Navaneeth now plans to join a start-up (based in the UK) as a Business Analyst. “As soon as I got into my second year, I realised that I should pursue an MBA, which I have completed, and so becoming a Business Analyst is a natural progression at this point.”

Ask him what his parents think about his achievement and he says, “My father is a BBA and my mother is a BCom graduate, and while both of them do not completely comprehend the scale of my achievement, they are extremely proud of me. They give me complete freedom and that’s why I’ve faced no problem in chasing my dreams.”

With his future already mapped and his dreams on track, Navaneeth is an inspiration to many students and he thanks his university for playing an instrumental role in his life.