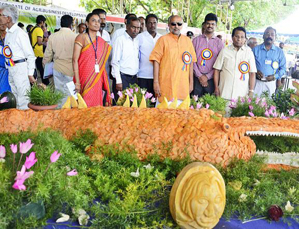 Need to save farmlands from real estate encroachers


Real estate sector should not be allowed to encroach upon farmlands and the government should encourage farmers in this regard, said National Coir Board Chairman C.P. Radhakrishnan.

Inaugurating a two-day Agriculture Expo, Uzhavar Kalanjiyam 2016, at the VIT University on Saturday, Mr. Radhakrishnan said that government should issue ‘farmers’ identity cards’ to every farmer which contained the details of their land holdings and the area with survey numbers.

“The government should provide farmers with seeds and help them with irrigation. The innovations of Tamil Nadu Agriculture University should reach farmers. Union government is taking steps to streamline the crop insurance,” he added.

Mr. Radhakrishnan said that he had asked the Prime Minister to bring coconut board and coir board under one umbrella. Farmers should unite so that natural resources could be properly shared, he said.

Toddy shops should be started to protect the livelihood of toddy tappers, he appealed to the government and pointed out that alcoholic content in the toddy was less when compared to Indian Made Foreign Liquor.

In his presidential address, VIT Chancellor G. Viswanathan said that only six crore hectares out of the total 16 crore hectares of cultivable land available in India were irrigated and the rest were rain fed. This affected agricultural production.

More than hundred stalls relating to the agriculture sector and farm productions were displayed in the exhibition.

VIT University vice president G.V.Selvam appealed to the farmers to shift from chemical inputs to organic production, pointing out that organic food had become a huge hit among the households across the globe.

Toddy shops should be started to protect livelihood of toddy tappers, says National Coir Board Chairman.