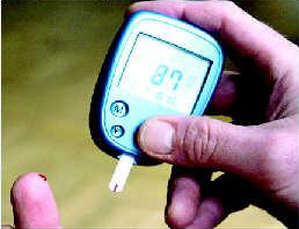 A non-invasive screening method could now help in early identification of pre-diabetes, and thereby, help in early initiation of lifestyle modifications to prevent progress to diabetes, according to experts.

In 2014, VIT University in collaboration with the Department of Health, Tamil Nadu Government, and M.V. Hospital for Diabetes, Royapuram, Chennai initiated a project for screening for pre-diabetes and undiagnosed diabetes in Timiri block, Vellore.

This study has brought out a non-invasive technique for estimation of salivary glucose as a screening method for pre-diabetes, according to Radha Sarawathy, senior professor, Department of Biomedical Sciences, School of Biosciences and Technology, VIT.

“We started the project in November 2014, and it took us a year to complete the analysis. We are using saliva instead of pricking and taking blood for testing. We asked our sample population, which is 300, to rinse their mouth before we collected saliva in a tube,” she said.

She added that the World Health Organisation protocol was followed in the testing procedures.
Initiated with focus on prevention of diabetes, the study covered Pattanam, Vellambi, Palayam and Mosur villages. It studied persons aged 20 to 70 years, and found prevalence of 38.3 per cent pre-diabetes and 13.7 per cent undiagnosed diabetes.

“Earlier, there have been studies that such salivary glucose could be tested for diabetes. Following this non-invasive method to screen for pre-diabetes will help in initiating early management,” she said.

In fact, the study went on to identify predictors for pre-diabetes through mathematical models that help estimate an individual’s glycemic status. It has shown that salivary glucose levels, low density lipoprotein and cholesterol levels as key predictors of pre-diabetes.

It has also attempted to identify a genetic marker among the ethnic population that might help in early diagnosis and early management of pre-diabetes.

“These can be used as markers in whole. The data has been submitted to the State government. We would like the primary health centre to go back to those identified with pre-diabetes and undiagnosed diabetes and introduce lifestyle management as the studied population was very anaemic. This non-invasive method could be taken to a larger population, particularly high risk groups,” she observed.

Vijay Viswanathan, head and chief diabetologist, M.V. Hospital for Diabetes, Royapuram, said the problem in screening for pre-diabetes, particularly children of diabetics, is that many are not keen on coming for blood test.
“There are about 50 million pre-diabetics in India. If we catch them early, we can prevent progress of pre-diabetes into clinical diabetes. Using salivary glucose is a good screening test to pick up pre-diabetes, and introduce lifestyle modifications,” he said,

For instance, if a woman is pre-diabetic, she could progress to diabetes when she becomes pregnant, he said, adding,
“Recently, we found that tuberculosis patients with pre-diabetes progressed to diabetes following TB infection. This study is significant as there is a large number of pre-diabetics.”