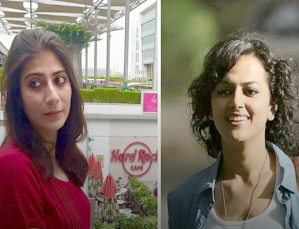 A poignant portrayal of Defence daughters One story at a time

Living in uncertainty about the safety of your own family may seem harsh, but that’s the life that most Defence personnel’s families go through. And each of them has tales to tell — sad, happy and ones of hope.

Helping them tell their stories is student Nachiket Pande, who runs the Facebook page Veterans of India — Stories. On the page, he tells the stories of war veterans from Indian defence organisations in the now-famous Humans of New York format — posting a photo of the veteran alongside a first-person narrative by them.

The page’s latest series — Defence Daughters — has caught the eye of netizens. The series is a departure from their regular style of posts, instead speaking from the voice of daughters of officers in the Indian Army.

Nachiket, who himself is an Army officer’s son and is currently pursuing an Engineering degree at Vellore Institute of Technology, says, “These stories are not about your lives, but they’re still interesting. And I wanted to make sure I had stories from all kinds of people — not just about combat, but normal lives of Defence personnel.”

A former Hyderabadi, who lived in Trimulgherry’s Detention Barracks between 2003 and 2008, Nachiket began the page in November last year and now runs it along with another Army kid from Pune, Nayanika Chatterjee.

The idea for the Defence Daughters series came to Nachiket from his sister, Nivedita. “I knew that if I started the series, the first person I wanted to feature was my elder sister. She’s seen him (their father) while he was in the field. It’s also easier to find kids and get their stories and their perspective on the lives of Defence personnel,” he explains.

One of the stories in the six-part series came from Shraddha Srinath, who has also lived in Hyderabad, who wrote about the “sense of belonging” that differentiates Army kids from the rest. “We flaunt our army background a lot, which is why we may seem proud or bratty.”


“But I think as Army kids, we’re raised to be really independent; you don’t see your dad around much, and your mum is holding the family together and it’s almost like she’s a single mum. We’re two daughters and our dad always made us carry our own bags... we were never treated like dainty girls. We were raised tough,” says Shraddha, who adds that the constant change of environment thanks to her dad’s regular transfers made her life “an adventure”.

Another story, from Sonakshi Mehta, spoke about how one of her dad’s war postings caused her mum so much stress while she was pregnant with her that Sonakshi was “technically dead” in the womb for two days. “My dad was obviously not reachable and was at that very point in an intensive operation, which was successful. He won a gallantry award for it. On the third day she went to get the baby removed. But I was back. The faintest heartbeat was present. They say that I am lucky for my dad, but I think it is the other way around,” Sonakshi wrote.

With another series on its way for the page, Nachiket adds that one of the best things about being a Defence kid is the way the families of Army units live: “Our family was not just the four of us, it was 500 of us. We were all together, always talking together. When our dads were posted to Kargil, all of us were in the station crying for everyone — not just our own parents.”