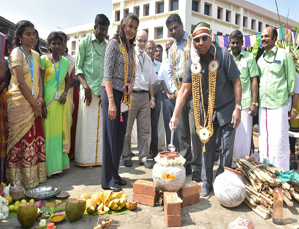 VELLORE: Pongal Celebrations began at Vellore Institute of Technology, Vellore with Founder and Chancellor Dr. G.Viswanathan inaugurating the events in a traditional manner.

Participants wore traditional costumes and the events began with the boiling of rice in the most traditional manner. Interacting with students on the occasion, Dr. G. Viswanathan appealed to the youth to spread the greatness of the Tamil people far and wide.

Pongal Celebrations are held at VIT every year and it is marked with great gusto and enthusiasm. Tamilians celebrate the festival with great fervour and the Tamil Diaspora all over the world too take part in the celebrations with equal enthusiasm. It is normal practice for Tamilians to return to their native ancestral place and celebrate the festival with their loved and dear ones. The sweetened rice or Pongal, prepared from jaggery is offered to the Sun God on the occasion after it is prepared in a specially decorated pot with religious fervour.

The festival is celebrated every year at VIT with the participation of students, faculty and management and non-teaching staff. Students from different countries took part in the celebrations, wearing traditional clothes of Tamil Nadu. The foreign students draped themselves in sarees with grace, while the male students wore a dhoti.

The procession culminated at foodys where Dr. Viswanathan was given a traditional headgear. He formally inaugurated the Pongal celebrations by preparing Pongal by mixing rice, jaggery, pulses, cardamom and cashew nuts in a traditional clay pot. Later a presentation of traditional folk art and dance of Tamil Nadu including Karagaattam, Thappaattam, Devaraattam, Kaavadi, Oilaattam, Kaaliaattam, Puliaattam and Poikaalkuthirai was made on the occasion along with cultural programmes by VIT students.

Dr. Viswanathan who launched the cultural events by lighting a traditional lamp, spoke on the occasion and said that Pongal was also addressed by many as the auspicious day of the Tamil month of Thai, World Tamils’ Day and also as Day of the Dravidian people. Not only in Tamil Nadu, but Pongal was celebrated all over the world wherever Tamil people lived. Tamil people lived in 90 countries in the world and in 30 of these countries, Tamil was spoken properly, he said. There were between 12 to 13 crore people in the world who spoke Tamil. While 8 crore people lived in India, the remaining 5 crore people in other countries of the world, Dr. Viswanathan said.

6,900 languages were currently spoken in the world and 100 of them were considered as being the most important and one among them was Tamil, the Founder and Chancellor of VIT said. Seven languages of the world were considered as ancient – Greek and Latin in Europe, Persian and Hebrew in West Asia, Tamil, Sanskrit and Chinese in Asia. Among these languages, the manner in which they were spoken had changed and Hebrew and Sanskrit had vanished and only Tamil and Chinese had not changed. Among these two, Tamil was more ancient than Chinese.

There were many literary works in the world but they were religious works, but Thirukkural, written by poet Thiruvalluvar was the one literary work that was in general and could be applied to all people of the world. It has now been translated into 87 languages and even Leo Tolstoy had written about it in great appreciation to Mahatma Gandhi. After reading the letter, Mahatma Gandhi expressed his desire to read Thirukkural and that in the next birth, he wanted to be born as a Tamilian, Dr. Viswanathan recalled.

While the world was now speaking about globalisation, it was spoken about long ago by Tamil Poet Kaliyan Poongundran when he said ‘yaathum oore, yaavarum kelir.’ Had it been written in English, it would have spread all over the world. The Tamil language was sweet and it was ancient. People should learn, read and write in Tamil and also have Tamil names and people should avoid speaking Tamil language mixed with English. The uniqueness of Tamil language and the greatness of the people of Tamil Nadu should be taken all over the world. The rise and growth of Tamil people should be given as an example to other people of the world, Dr. Viswanathan said.