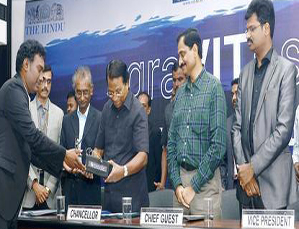 The eighth edition of VIT University’s international knowledge carnival — graVITas 2016 — took off on Friday with the launch of four products developed by students.

Centered around the theme, ‘Engineering for changing lives’, the carnival served as the launch pad for the products, one of which was focused on reducing infant deaths.

Introducing ‘Cradle – Smart Baby Monitor,’ Ramakrishnan, one of the students who developed the product, said, “This is a wearable device that can measure the infant’s vital parameters and room temperature. The sensor node will send information to the parent’s smart phone. In case of an emergency, there will be an alarm notification to parents. There is also a sounding buzzer on the device.”

The team is ready with the prototype of the device, which will monitor the breathing pattern, sleeping position, temperature and heartbeat of an infant.

It has come up with the Windows app, and are also ready with iOS app, he said, adding that this was a move towards reducing infant deaths in the country.

‘Kisaan Mitra – Internet of Things’ will help farmers to detect diseases early. It provides services such as real-time monitoring of field conditions, maintenance of accurate farm data and their analysis to achieve optimal crop yield.

To address the problem of e-waste, a student has come up with an e-waste hack bin, which will collect e-waste from hostels and academic buildings and remodel them into open source learning modules.

The fourth product is a bicycle-operated charger.

Addressing the gathering, G. Viswanathan, VIT chancellor, said the government, industries and the private sector should spend more on research.

Noting that India spent 3.5 per cent GDP on education, he said it was time to spend more on education.

“Engineers are ambassadors to bridge the gap between society and technology. They can change lives, society and the country.

“Without engineers, no developed country can become an advanced country,” he said and urged engineers to become entrepreneurs.

C. K. Ranganathan, founder and chairman, CavinKare Group, Chennai, urged students not to be job-seekers but job providers. He stressed the need to have a dream and be committed to it. The three-day event consists of over 20 premium events, 80 technical events and 38 workshops, with prizes worth Rs. 21 lakh to be won. Anand A. Samuel, vice chancellor and G.V. Selvam, vice president of VIT were present.
The Hindu is the media partner for the event.